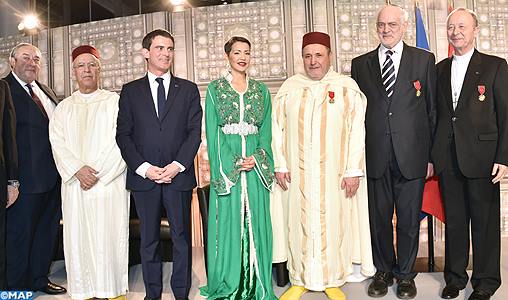 Royal distinctions of Wissam Al Arch of third class (officer) were presented by HRH Princess Lalla Meryem during a ceremony in the Arab World institute (IMA) to Khalil Merroun, rector of Evry mosque, Michel Serfaty, Rabbi of Ris-Orangis and Michel Dubost, Evry bishop, who are all of Moroccan origin.

Valls, who attended the ceremony, said that “in the face of fanaticism and ignorance, the culture of tolerance represents the best response.”

He noted that the ceremony coincides with the auguring of a new era in Moroccan-French relations.

In this regards, the French PM expressed satisfaction at the long-standing ties of friendship with Morocco which he considered as “a permanent bridge.”

He said France and Morocco are championing the advocacy of tolerance, peace and coexistence, applauding, in this respect, Morocco’s constitutional recognition of the Hebraic constituent in its identity.

The ceremony was attended by President of the IMA, Minister for Endowments and Islamic Affairs Ahmed Toufiq, Secretary General of the Jewish Communities in Morocco Itinerary Ambassador-at-large Serge Berdugo, Morocco’s Ambassador to France Chakib Benmoussa and dignitaries representing the three monotheistic religions.