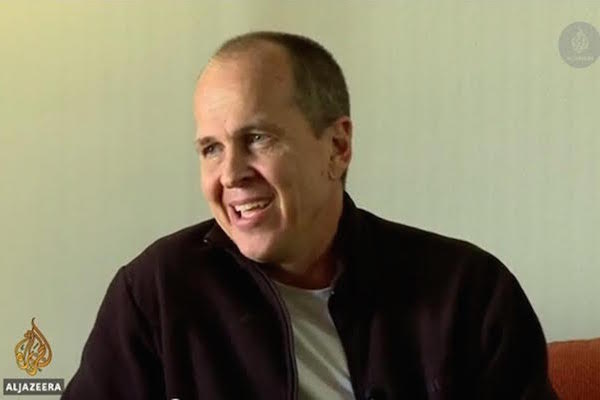 London – In his first interview since being freed from an Egypt jail after 400 days in captivity, Al Jazeera journalist Peter Greste called on the Egyptian authorities to release two of his colleagues still being held: Baher Mohamed and Mohamed Fahmy.

“I feel incredible angst about my colleagues, leaving them behind. Amidst all this relief, I still feel a sense of concern and worry. If it’s appropriate for me to be free, it’s right for all of them to be freed.”

“When you spend 400 days in such close proximity with people, you get to know them really well. It was a really difficult moment walking out and leaving the prison, saying goodbye to those guys, not knowing how much longer they will have to put up with this,” he added.

Peter spoke highly of his two colleagues still in jail.

“I’ve got to know and accept Baher and Mohamed as family; they’re my brothers.”

“Mohamed Fahmy is an extraordinary professional, a dedicated journalist, very passionate and a strong-willed character.”

“Baher is one of the most amazing family men I have ever met. If anyone has suffered out of all of this, it is Baher… He has a wife and three children, one of whom was born while he was prison…”

“We need to keep the focus on him and we don’t quite know what’s going to happen from here on.”

Peter also discussed how he felt on being told he was to be released. “I wasn’t expecting [to be released] at all. I woke up thinking of the campaign ahead of us. I went for a run and the prison warden called me over and told me it’s time to pack your stuff. He told me the embassy is coming. There was a mix of emotion boiling inside. A sense of relief and excitement, but a stress of having to say goodbye to my colleagues.”