Rabat - The Confederation of African Football (CAF) has decided to suspend Mauritian referee, Rajindraparsad Seechurn, for six months for  “poor refereeing” folloowing his decision to award hosts equatorial Guinea a controversial penalty in their 2015 Afcon quarter final clash against Tunisia. 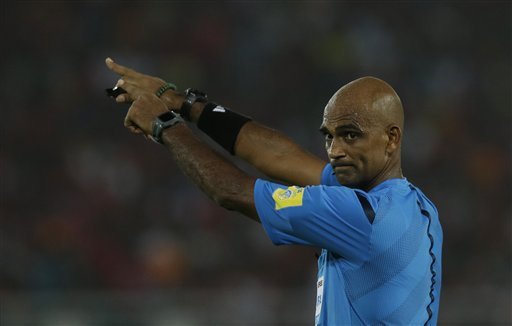 Rabat – The Confederation of African Football (CAF) has decided to suspend Mauritian referee, Rajindraparsad Seechurn, for six months for  “poor refereeing” folloowing his decision to award hosts equatorial Guinea a controversial penalty in their 2015 Afcon quarter final clash against Tunisia.

The CAF Referees Committee said in a statement that the referee Rajindraparsad Seechurn failed to maintain calm and ensure proper control of the players during the match between Equatorial Guinea and Tunisia plazed on 31 Januarz in Bata.

The Referess Committee has also decided to end the mission of Rajindraparsad Seechurn as a referee for the Afcon 2015, to suspend him for a period of six months for poor performance and to delist him from the CAF A Elist Referees panel.

Seechurn awarded hosts Equatorial Guinea a controversial penalty into stoppage time, which helped them equalise and revive their hopes of qualifying to the next round. The Guineans managed to score another goal in extra time to progress to the semi-finals.

The Tunisian Football Federation was fined US$ 50,000 for ‘aggressive and unacceptable behavior’ of its players and officials  during the aforementioned game.

The Equatorial Guinean Football Federation was also fined US$ 5000 for ‘the lack of security arrangeements’ after some Equatoguinean fans invaded the pitch.