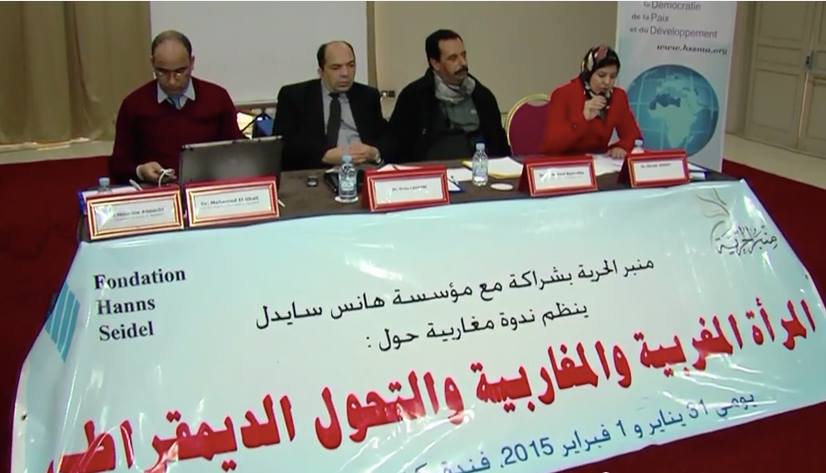 Marrakesh – Mentalities must change and institutional reforms ought to be activated in order for women of the Grand Maghreb to become integrated into the political decision-making process of their countries, according to presenters at the recent conference on “The Moroccan/Maghrebi Woman and the Democratic Transition” held in Marrakech on January 31st and February 1st.

The conference was convened by Hans Seidel Foundation and the Tribune of Freedom’s project to articulate the need for women to be able to access political decision-making in the Maghreb countries.

As a region with strong patriarchal values, there is a disparity between reality and legislative good intentions through the implementation of constitutional provisions providing equality between men and women. Ikram Adnani, Representative of the Tribune of Freedom’s project, explained that the implementation of constitutional provisions is the greatest challenge in which Maghrebi women should be wholly involved.

Women played a strong role in the changes brought to the Arab world following the so-called Arab Spring, but according to researcher Mohamed Al Ghali, the constitutional jurisdiction is still very conservative, and has not become acclimatized to the large-scale changes that societies have experienced, a factor which explains the low rate of women’s access to decision-making’s positions.

Jaoquin Lopah, the Regional Resident Representative of the Hans Seidel Foundation, remarked that while Morocco and Tunisia have quite developed institutions, women still find it difficult to participate in the management of political affairs. He added that socioeconomic development cannot be achieved without women’s full engagement in society and politics.

Researcher Mohamed Ben Talha called for the establishment and solidification of ideas and theories that will change the mentalities and perceptions of society’s members, which will allow for women’s complete and dynamic political participation.

The meeting highlighted the experiences of other Maghrebi countries regarding women’s political involvement, targeting promoting democracy, peace and development.