Rabat - The first women-only mosque in the United States opened its doors exclusively for women and children (including boys 12 and under) on Friday, January 30, at the Pico Union Project in Downtown Los Angeles. 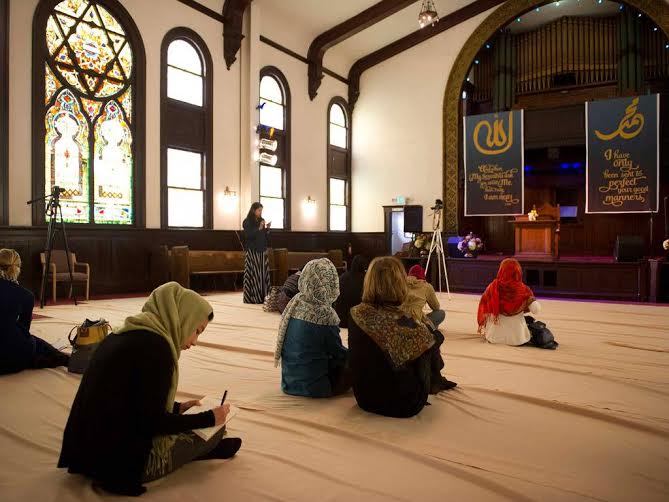 By
Larbi Arbaoui
-
Larbi is a freelance writer and assistant editor at Morocco World News.
Feb 4, 2015
Spread the love

Rabat – The first women-only mosque in the United States opened its doors exclusively for women and children (including boys 12 and under) on Friday, January 30, at the Pico Union Project in Downtown Los Angeles.

More than 100 women gathered Friday at the Women’s Mosque of America for an inaugural women-led Jummaa prayer, marking the launch of this first of its kind mosque in the United States.

Edina Lekovic of the Muslim Public Affairs Council led the inaugural Friday prayer.
Originally built as a synagogue, the Pico-Union hosted the Women’s Mosque of America and Jewish and Christian groups.

The Women’s Mosque of America posted on its official website that the mosque “seeks to uplift the Muslim community by empowering women and girls through more direct access to Islamic scholarship and leadership opportunities.”

Unusual in Muslim society, “the Women’s Mosque of America provides women-led Friday jumma’a services for women and children (including boys 12 and under) once a month in Southern California.”

The Women-only Mosque of America will not assign permanently a woman imam to lead the prayers and deliver the Khutba (sermon). However, “it will have rotating imamahs and speakers to offer diverse perspectives from a wide range of scholars, and to open up opportunities for women who may not have previously received a chance to speak in front of a Muslim audience,” the Mosque administration said. Women-led prayers are a controversial issue among Muslim scholars.

The Women’s Mosque of America welcomes all Muslim women without any required dress code. “We encourage all women to enter the mosque in the type and style of clothing in which they feel comfortable,” the administration of the mosque said.