Rabat - Tunisian Minister of Sports and Youth, Saber Bouatay, called on Morocco, Algeria, Libya and Egypt to support his country and withdraw from the Confederation of African Football, known as CAF. 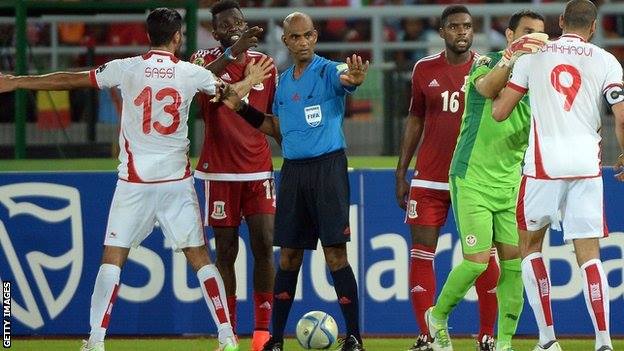 Rabat – Tunisian Minister of Sports and Youth, Saber Bouatay, called on Morocco, Algeria, Libya and Egypt to support his country and withdraw from the Confederation of African Football, known as CAF.

The Tunisian Football Federation has reportedly decided it will not apologize to the Confederation of African Football (CAF) in the wake of the post-match incident during the 2015 Afcon quarter final clash against hosts Equatorial Guinea.

The governing body of African football decided to fine the Tunisian Football Federation US$ 50,000 for what it described as the ‘aggressive and unacceptable behavior’ of its players, coaches and officials during the aforementioned game.

“The disciplinary panel would suggest to the Executive Committee of CAF additional sanctions, including the possibility not to accept the participation of the national team of Tunisia in the next edition of Cup of Nations, Afcon, 2017,” CAF said in a statement.

Tunisia protested against the referee’s decision to award hosts Equatorial Guinea a controversial penalty deep into stoppage time which helped them equalize and revive their hopes of qualifying to the next round. The Guineans managed to score another goal in extra time to progress to the semi-finals.

Tunisian Football Federation President Wadie Jary resigned from the Confederation of African Football on Sunday in protest of the referee’s decision to award the hosts the controversial penalty.