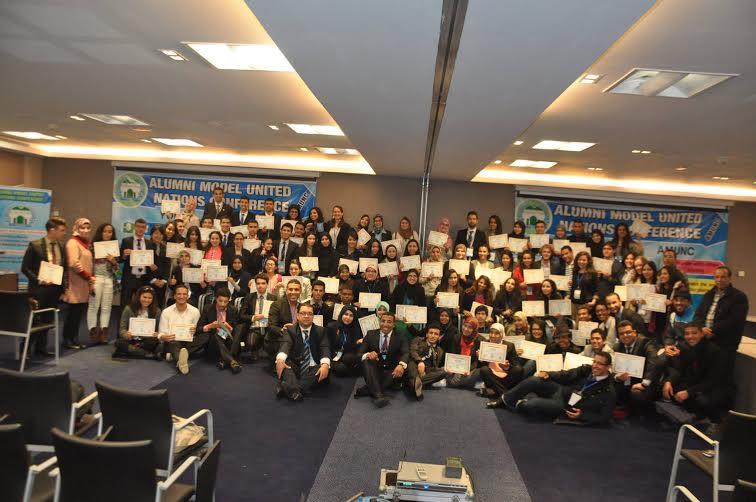 Fez – The city of Fes recently held the first Alumni Model United Nations conference (AMUNC) between January 30th and the 1st of February.

The event was organized by the Association of Moroccan American Dialogue (AMAD) and was sponsored by the US Embassy in Rabat.

Alumni Model United Nations Conference is an educational simulation and an academic competition in which participants role-play delegates to the United Nations and it simulates two UN organs, the Security Council and the General Assembly. The conference is compromised of formal debates and adheres to the procedural rules that run the UN and are stated in the UN charter.

The program was born of the idea of bringing 100 Moroccan delegates together from different regions and professional backgrounds, ranging from high school and undergraduate students to young practitioners of various occupations.

The selected participants were sorted into multiple delegations prior to the conference to represent a country and to prepare position papers inspired by the conference themes: maintenance of international peace and security and eliminating racial l discrimination, xenophobia and related intolerance.

“The AMUNC was a great experience during which I got to learn a lot about the governmental policies of not only the country I was representing (Lithuania), but also about all the policies of the other present countries… Teambuilding, diplomacy and compromise as well as public speaking are only few skilled I gained from this conference… Winning the “Best Delegate Award” was also a massive honor for me and I hope this won’t be my last MUN experience…” said Nada Afa, senior in Al Maarifa High school and YES exchange program alumnus.

Throughout the conference, delegates practiced debate, research, writing and teamwork. Moreover, they gained insight into international relations, diplomacy and globally controversial issues. AMUNC also proved to be an interactive platform in which to share experiences and create future partnerships. Participants also had the opportunity to learn about different exchange programs sponsored by the US embassy.

The first AMUNC meeting was an overwhelming success. Both the organizing committee and attendees expressed satisfaction regarding the outcome and had positive views of the conference. They also hoped there would be a second conference that would bring delegates from other countries in order to create international bonds of partnership and friendship.

“I think this first edition was a very successful experience, a very successful edition thanks to the astonishing – I would say – group of young leaders who came from diverse geographical and professional backgrounds… Participants learned a lot of skills including public speaking, negotiations and diplomacy, and writing draft resolutions in an attempt to resolve various global conflicts …. We are hoping that the next edition will be international and we will try to invite delegates from different countries…” said Fouad Touzani, AMUNC Founder and AMAD board member.