Fez - US Ambassador to Morocco Dwight Bush spoke about his upbringing, the American dream, and the transition he made from the business and finance sector to diplomacy at a meeting with students from the Moulay Driss High School in Fez on Tuesday. 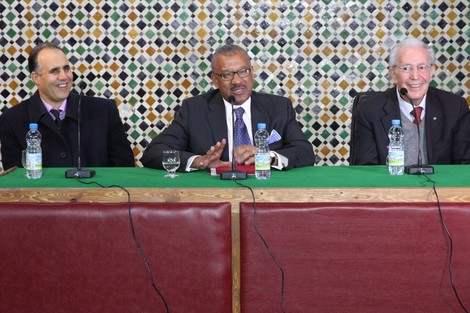 Fez – US Ambassador to Morocco Dwight Bush spoke about his upbringing, the American dream, and the transition he made from the business and finance sector to diplomacy at a meeting with students from the Moulay Driss High School in Fez on Tuesday.

During the meeting, the American ambassador told the audience how his father urged him to consider working at an early age. He said that his father gave him a machine when he was only twelve, at a time when other children were being offered bicycles and balls from their parents.

A nostalgic Bush said that he had to work 36 hours a week during his undergraduate studies. His hard work at the university allowed him to land a job in the private sector, which enabled him to travel to many countries around the world. “My travels helped me understand foreign cultures and get a firsthand account of other people’s experiences,” he said.

The Ambassador said that his friend, President of the United States Barack Obama, initially asked him to work at the U.S. Department of the Treasury.

However, and after he turned down the offer, he was asked again to join the Foreign Service. This time, Bush accepted the proposal, on the condition that he would be appointed the United States Ambassador to Morocco.

Bush added that President Obama was confused by his request, since most American diplomats would usually choose to represent their country in European posts.

Bush defended his choice to President Obama by saying that the kingdom has begun a process of reform, in addition to its association with a number of American partnerships and programs.

“I told him that Morocco is a future and that we have to consolidate our relations more,” he said, adding that Obama approved with no objection whatsoever.