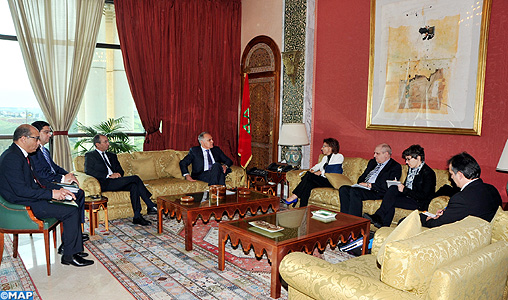 During the meeting, the two Ministers expressed Morocco’s full commitment to bring the necessary support to help Bolduc perform the functions assigned to her in accordance with the terms agreed upon during a phone conversation on January 22, 2015 between HM King Mohammed VI and UN Secretary General, the same source said.

Kim Bolduc was appointed by the UNSG last May. But Morocco expressed reservation on her appointment.

It was only after the phone held between Ban Ki-moon and King Mohammed VI last month that Morocco accepted to welcome her as new UNSG’s Special Representative for Western Sahara.

During that phone conversation, the UN Secretary General also reiterated that United Nations Mission for the Organization of a Referendum in Western Sahara, known as  MINURSO “will continue to exercise its existing mandate as set forth by the Security Council”.

In response, King Mohammed VI indicated that Morocco looks forward to moving ahead in collaboration with the United Nations and that Morocco’s Permanent Representative to the United Nations will be working with the Secretary-General’s Personal Envoy, Christopher Ross, to arrange his next visit to Morocco as soon as possible, as well as with the Secretary-General’s Special Representative and Head of MINURSO, Kim Bolduc, to facilitate her rapid deployment to the region.

Speaking on the sidelines of a meeting with the Italian Foreign Minister, last January 27 Morocco’s chief diplomat said that “following the clarifications submitted to the King and Rabat’s commitment to facilitate the mission of the UN envoy, Christopher Ross and the head of MINURSO Kim Bolduc are welcomed in Morocco in order to complete their mission in the region.”

The new Special Representative of the Secretary-General succeeds to Mr. Wolfgang Weisbrod of Germany, who completed his assignment on 31 April 20114.