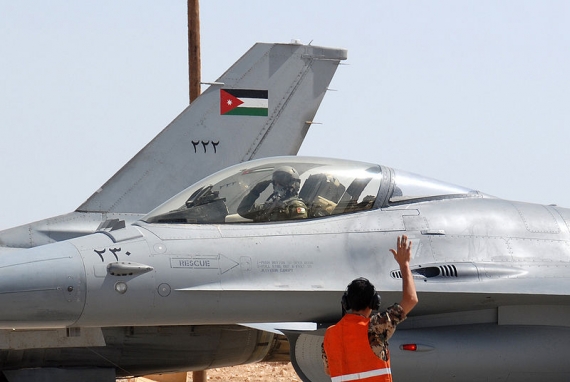 Rabat – Jordan has vowed to continue its fight against the Islamic State both in Syria and in Iraq in retaliation to the brutal murder of Jordanian pilot Lt. Moath al-Kasasbeh by IS two days ago.

Jordan began its attack on Thursday with airstrikes targeting training centers as well as arms and ammunition depots, according to a statement made by the Jordanian armed forces on state TV. They added that the air mission, called “Moath the Martyr” is “just the beginning,” claiming that “all targets were completely destroyed and all planes returned to their bases safely.”

However, Jordanian Foreign Minister Nasser Judeh clarified Jordan’s involvement in the fight against IS, explaining to CNN News that Thursday’s airstrike is “actually the beginning of our retaliation over this horrific and brutal murder of our brave young pilot, but it’s not the beginning of our fight against terrorism and extremism”. Jordan is now one of four countries in the Middle East that have joined the fight against IS, the other three being Saudi Arabia, the United Arab Emirates, and Qatar.

King Abdullah II of Jordan corroborated Judeh’s statement in a speech released through the Jordanian embassy in Washington, saying that the war against IS “is not a war the world can afford to lose. But to win it, all of us must be in it”.

Jordan executed two IS prisoners on Wednesday in response to al-Kasasbeh’s murder – Sajida al-Rishawi, a failed suicide bomber, and Ziad Karbouli, former aide to Abu Musab al-Zarqawi, the late leader of al-Qaeda in Iraq. It is now believed that despite IS’ demands for al-Rishawi to be released in return for the life of al-Kasasbeh, the Jordanian pilot had actually been murdered the previous month.

For Jordan, however, the executions of the prisoners were not enough. “We’re upping the ante”, Foreign Minister Judeh stated to CNN’s Wolf Blitzer, “we’re going after them wherever they are with everything that we have, but it’s not the beginning, and it’s certainly not the end.”

The brutality of IS’ latest execution that stirred Jordan into more aggressive action may prove to be IS’ downfall, according to a number of prominent Muslims. Egypt’s Grand Mufti, Sheikh Shawki Ibrahim Abdel-Karim Allam, told CNN that the murder is “far away from humanity, much less religion”. Judeh added in his interview with Blitzer that, “if there was any doubt that this is an organization that has anything to do with any religion on the face of this planet, that doubt has gone.”