Rabat - François Fillon, the former Prime Minister of France, is reportedly willing to review the 1905 French law on the separation of church and state in order to “successfully integrate” the Muslim community in France.

Rabat – François Fillon, the former Prime Minister of France, is reportedly willing to review the 1905 French law on the separation of church and state in order to “successfully integrate” the Muslim community in France.

In the aftermath of the Charlie Hebdo attacks, and given the recent increase in anti-Islamic acts in France, the question of the practicality of “Laïcité” (In English, secularity), the backbone of the French Republic, has sparked controversy.

In an interview with Le Figaro cited by Le Point, Fillon said that, “if we want to fully succeed in integrating the Muslim religion in the Republic, nothing should be prohibited.”

“I am committed to the principle of secularism, but to assume that nothing needs to change is a mistake. The 1905 Act is not a relic in a museum.”

Fillon added that “the law does not give us the opportunity today to control the training of imams, nor the source of funding of places of worship.”

However, French President François Hollande said at a news conference in Paris on Thursday that laïcité is “a guarantee for France,” and that “there is no question of changing the 1905 law.” 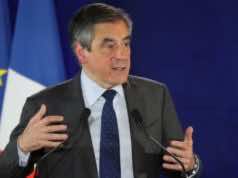