Rabat- The Egyptian anti-coup channel "Mikamilin" broadcasted a leaked conversation from early 2014 between Abdelfattah Al-Sisi, then the Defense Minister, Chief of Staff of the Egyptian Armed Forces Mahmoud Hegazy, and Brigadier General Abbas Kamil, the manager of Sisi's office. 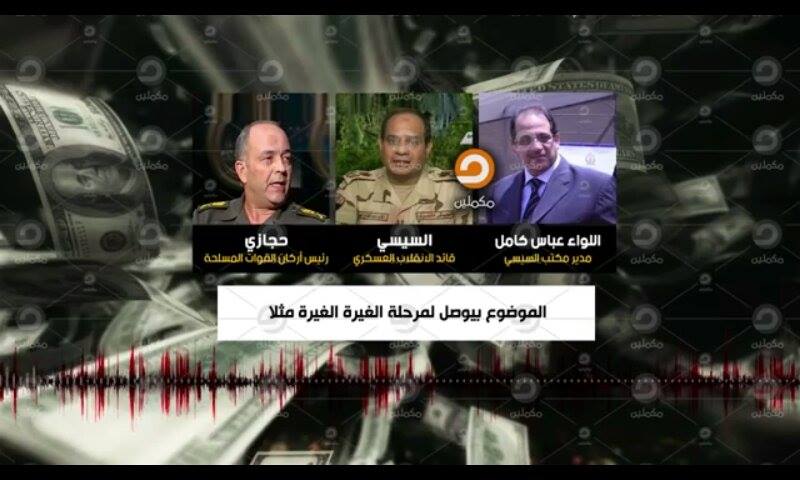 Rabat- The Egyptian anti-coup channel “Mikamilin” broadcasted a leaked conversation from early 2014 between Abdelfattah Al-Sisi, then the Defense Minister, Chief of Staff of the Egyptian Armed Forces Mahmoud Hegazy, and Brigadier General Abbas Kamil, the manager of Sisi’s office.

The audio recording aired by the Turkey-based channel shows Sisi criticizing the Gulf countries in the privacy of his office with the two Egyptian Army officials; despite the immense financial and political support most of Gulf countries have endowed Egypt.

Sisi is heard telling Kamil to ask Saudi Arabia, Kuwait, and UAE to transfer 10 billion dollars each to bank accounts belonging to the military. Both men are also heard discussing ways that the money could be sent without the Egyptian public’s knowledge. “What are you laughing at? They have money like rice!” Sisi said to Kamil.

Most of the demeaning language in the recording is attributed to Kamil. He is heard describing the Gulf states as “half-states” and that Kuwait should be grateful to Egypt for its military support in the 1991 Gulf War when the Kuwaitis “were in trouble”.

Qatar, Egypt’s fiercest enemy in the region, also received its share of the demeaning remarks. Unprecedentedly, the audio leaks show high officials insulting the Qatari royal family with vulgar language. Talking about the Emir of Qatar, Kamil calls him a “Son of a b***h with a 900 billion dollars in national reserve”. Sisi did not object to this remark.

Since it was aired on Saturday, the recording has gone viral on social media. Thousands of Facebook and Twitter posts, under the hashtag  #Sisi_despises_the_Gulf, express the overwhelming dissatisfaction of many people in the Gulf, Egypt, and the rest of Arab world.

“You are lunatic if you had high hopes of someone who burnt innocent people in Rabia and Annahdah, killed weak people in Sinai, and besieged hungry people in Gaza strip” said the Saudi writer Turki Al-Jasser in a Tweet under the hashtag.