Rabat - Palestine has opened its first ever embassy in Western Europe in the Swedish capital of Stockholm. 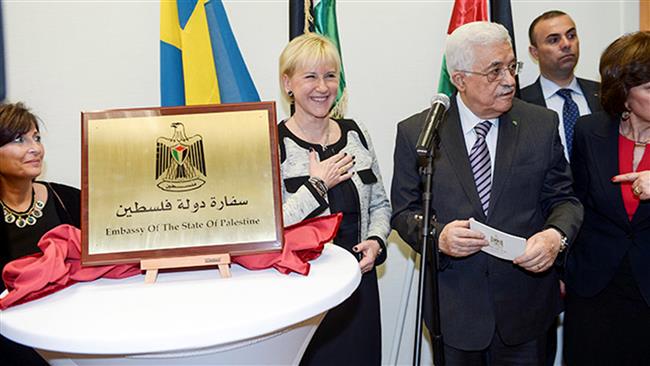 Rabat – Palestine has opened its first ever embassy in Western Europe in the Swedish capital of Stockholm.

“Your recognition…should push forward negotiations in the peace process,” Abbas said during the ceremony, also attended by Prime Minister of Sweden Stefan Loefven.

Earlier, Sweden announced that it will increase financial aid to Palestinians by 1.5 billion Kronas (US$Q179.74) over the next five years. But it also called on the Palestinians to carry out reforms.

“There are challenges: we must help one another to fight corruption, increase gender equality, improve respect for human rights, and of course continue the state building process,” Swedish Prime Minister Lofven said.

For his part, Abbas reassured the Swedish side that reforms are currently underway in Palestine.

“Women will play a central role in our institutions on the political level, and municipal contexts, within the judicial system, within security organizations, and on all other levels. We will continue to develop our institutions, in order to raise (women’s) abilities in order to achieve what our people have sacrificed so much for,” the Palestinian President said.

The relations between Sweden and Israel deteriorated following the move. Israel recalled its envoy from Sweden and the Swedish foreign minister also postponed a visit to Israel in January.