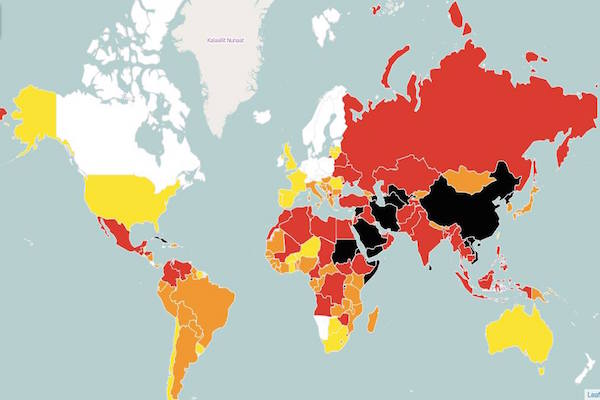 In its 2015 Press Freedom Index, Reporters Without Borders hailed the Moroccan government’s attempts to overhaul media legislation. The non-profit organization said that some of the provisions, especially the proposed abolition of prison sentences for media offence, included in the three bills on “press and publishing,” the “status of professional journalists” and the “National Press Council” unveiled last October are “positive”.

However, RWB concluded that “improvements are needed to bring them into line with international standards on freedom of information.” It also added that although the kingdom rose slightly in the 2015 Index, “the freedom of information in Morocco is still constrained both in current practice and in the proposed legislation by the red lines forbidding coverage of the monarchy, Islam and territorial issues, and by the criminalization of blasphemy.”

Globally, RWB’s 2015 Index highlights the worldwide deterioration in freedom of information in 2014. “Beset by wars, the growing threat from non-state operatives, violence during demonstrations and the economic crisis, media freedom is in retreat on all five continents,” it said.

The Reporters Without Borders World Press Freedom Index ranked the performance of 180 countries according to a range of criteria that include media pluralism and independence, respect for the safety and freedom of journalists, and the legislative, institutional ad infrastructural environment in which the media operate.

The top three positions were held by three Scandinavian countries: Finland, which has been in first place for five consecutive years, followed by Norway and Denmark. Turkmenistan, North Korea and Eritrea were the worst performers in this year’s index.