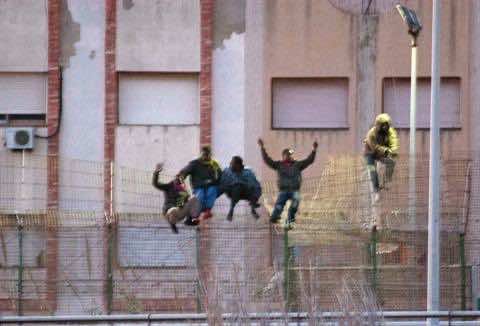 Rabat – Speaking about the situation of migrants in Morocco, Charki Draiss Minister Delegate to Moroccan Interior Minister, said in a speech on Monday that housing camps around both Melilla and the other Spanish enclave of Ceuta would be dismantled “very soon.”

His words came true on Tuesday morning when Moroccan authorities dismantled several camps outside of the Spanish enclave of Melilla in Morocco’s northeast following attempts made by migrants to illegally cross the border with Melilla. Spanish authorities claim that over 600 migrants attempted the crossing. But that only 35 people succeeded in their attempts, while 5 were injured.

Over 1,200 migrants were detained during the raid and are now on their way to camps elsewhere, according to human rights organization Caminando Fronteras.

The problem arose as a result of migrants who use Morocco as a starting off point from which to enter Europe illegally. Due to a new immigration policy, Morocco is now cracking down on these migrants. In this regard, said that Morocco “gave them many opportunities, and now if they don’t want to stay, we will have to enforce the law for the sake of security.”

A similar problem occurred in the other enclave of Ceuta in Morocco’s north last year when 15 migrants died while attempting to swim to Ceuta. They were allegedly sprayed with teargas and rubber bullets by Spanish guards, 16 of whom are now on trial for the deaths.