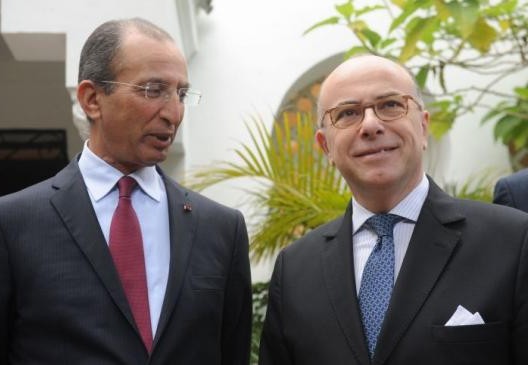 Cazeneuve, in this regards, lauded the reliability of Morocco’s intelligence services saying “Morocco’s expertise is precious and Moroccan services have shown their efficiency through the busting of several terrorist cells and their affiliates in the recent months.”

Cazaneuve lauded, in this regard, the ‘professionalism’ shown by Morocco’s domestic intelligence services (DGST) with a special mention to its Director General Abdellatif Hammouchi.

The French official went on to say that the role of DGST leadership is “decisive in the fight we are leading against terrorism.”

Cazaneuve recalled that the French National Order of Merit with the rank of Knight was awarded to Hammouchi in 2011, adding that the Moroccan official will soon receive the Légion d’honneur order in recognition for his efforts.

“We are willing to further boost this security cooperation with Morocco,” said the French official, who said that he agreed with his Moroccan counterpart to expand this cooperation to the fight against illegal immigration, organized crime and drug trafficking.

It was also agreed to reinforce cooperation between the different services of the interior ministries of France and Morocco, he said.

Tackling radicalization is another area of cooperation we would like to strengthen with Morocco, said the French Minister, adding that “the Kingdom has undertaken efforts in favor of promoting, within the Moroccan community abroad and in the region, an open and tolerant Islam.”

In the same vein, Cazaneuve praised Morocco’s decision to train foreign Imams, an experience which he said represent a further area of collaboration.

The visit to Morocco is also an opportunity to “condemn in the strongest terms” the islamophobic acts that followed the Paris attacks, he said. “Those who harm Muslims because of their religious faith are harming the republic as a whole and that is unacceptable,”Cazaneuve made it clear.

“There is a lot we can do together with Morocco to face the all sorts of amalgams and openly recall that the barbaric acts perpetrated in France have nothing to do with Islam and cannot be attached to any religion or culture,” said the French Interior Minister.

In the face of “a common terrorist threat, the renewal of our full cooperation was a need and a shared will,” he said, adding “this shows that in difficult moments that the Moroccan and French friendship grows stronger.”

“This common willingness to fight against terrorism and to advocate the message of tolerance should be based on an environment of mutual trust,” Cazaneuve said, highlighting that the agreement signed on January 31 paves the way for a reinvigorated judicial cooperation between the two countries.

In this connection, he recalled that the strength of relations between Morocco and France was highlighted during the meeting between King Mohammed VI and French President François Holland. During the meeting, he said, the two Heads of States expressed commitment to work together to counter terrorism and reinforce security cooperation.

“This mutual commitment is more important than ever” as the two countries are facing the serious threat of terrorism of which France has recently been plagued, he said.

This “remarkable” bilateral relations which withstands difficulties illustrates the “political willingness that is expressed at the highest level to preserve the unique partnership between our two countries,” the French Interior Minister went on to say.

On this occasion, Cazaneuve expressed satisfaction regarding the longstanding ties with Morocco noting that “France is a friend of Morocco today more than ever.”