Toronto - A couple of weeks ago, Shaima El Sabbagh, an Egyptian young activist and mother, fell under the bullets of security forces in Cairo. 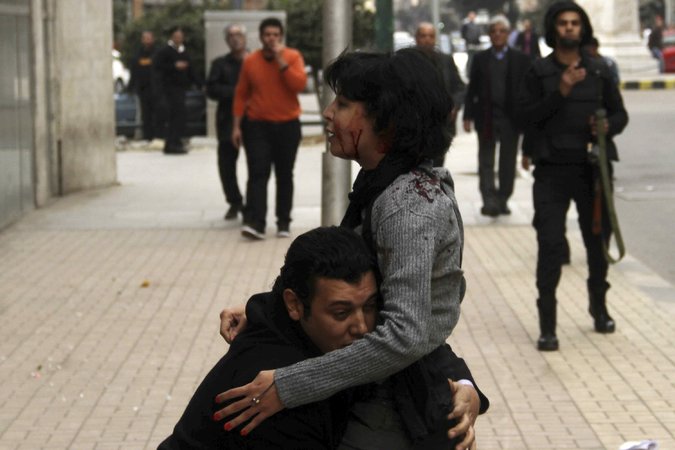 Toronto – A couple of weeks ago, Shaima El Sabbagh, an Egyptian young activist and mother, fell under the bullets of security forces in Cairo.

The gut-wrenching pictures of her slow death made world headlines from France’s Le Monde to the iconic New York Times. Her crime? She wanted to lay a wreath of roses in honor of those who gave their lives in Tahrir Square during the Egyptian revolution.

Visiting Egypt for the first time in late 2011, I saw a country full of hope. People seemed proud to be Egyptian again, three decades after Mubarak’s regime and its martial laws. I was constantly reminded of the endearing “Misr Oumou Dounia” when Egyptians described their country as the cradle of civilisation. The January 25th revolution was young and spirits ran high.

Four years later, thousands have been killed and 40,000 reportedly political prisoners. To grasp what happened, a brief look at Egypt’s trajectory and the role of the military in shaping the Egyptian society is required.

The Military and the People Are One,” Or Are They?

During the 1973 war between Arab states and Israel when Egyptian forces breached their siege and crossed the “impenetrable” Suez Canal, Sadat’s military engineered a myth-like image for Egypt. Then Carter-brokered Camp David Accord of 1979, came which enabled Egypt to recover Sinai in exchange for the recognition of Israel as a state. It transformed Egypt in unimaginable ways, not least of them Sadat’s assassination by sympathizers of the then-banned Muslim Brotherhood. The accord also relieved the Egyptian military from the specter of having to face the better-trained, well-equipped Israeli army. Well-wishers at the time, including Carter, hoped the accord would usher in a new era of regional peace and an opportunity for economic development, particularity in needy Egypt.

Without limiting the military to consigning troops to their barracks and defending the nation’s borders in times of need, the SCAF (Supreme Council of the Armed Forces) turned its eye to the economy and became a di-facto executives’ boardroom for “Egypt Inc.” Over 30 years of Mubarak rule, the military was pervasive in virtually every aspect of the Egyptian economy, ranging from imports and exports, to real-estate and manufacturing. Some believe that a substantial chunk of Egypt GDP output is under direct control of the army. It is no secret that some of the biggest public, and some private companies, while fronted by civilians, are largely held by the military.

SCAF vs. Revolution: “The Wolf Guarding The Sheep”

Mubarak’s fall following mass protests in Tahrir Square would have failed without the SCAF generals’ “blessings.” In their cost-benefit analysis they sacrificed one of their own so that rest of the institution could survive and thrive. Yes, Mubarak epitomized the ills of bad governance in Egypt, but he was only one spoke, albeit the dominant and most visible, in the wheel of the faceless SCAF. After throwing the old embattled friend under the bus, the SCAF promoted itself as the revolution caretaker.

Some activists saw through the SCAF’s underhanded agenda and warned against it, but most Egyptians had revolution-fatigue. After all, Mubarak and his entourage were in jail, awaiting trial for killing protesters and on corruption charges-Tahya Tawra (Long-lives-the-revolution). The leaderless revolution movement had simply been out-maneuvered by the generals. To make matters worse, the Muslim Brotherhood, who initially stayed out of the fray, saw this vacuum as an opportunity to accomplish their age old goal to establish a religiously inspired state. But, it was the more secular youth activists who had set the stage.
Democracy’s Tough Choices

Presidential elections were held after two years of political instability, daily protests and military repression. Although none of the candidates represented the youth who triggered the revolution, each managed to claim it as his own: Baradai (Former IEA head), Moussa (Former Arab League director), Sabahi (Left-leaning former parliamentarian), Morsi (Muslim Brotherhood) and Shafiq (close Mubarak ally and former minister).

After the first round of elections, two unlikely candidates remained on the ballot: Shafiq, representing the defunct-regime and Morsi, the Islamist. To the majority of Egyptians who cared about freedom and social justice, the choices could not have been more inadequate. They were caught in between the proverbial rock and a hard place. During this time, the media fueled that polarization of Egypt in a major way. Conspiracy theories ran wild between Morsi’s desire to conspire with Qatar and Turkey to establish an Islamist Caliphate and Shafiq’s plans to collaborate with the Americans and Israelis to bring back Mubarak. After a tense and protracted campaign, Morsi was declared president by a thin margin.

The Muslim Brotherhood at the Helm

Despite Morsi’s official resignation from the Muslim Brotherhood to rally Egyptians under his presidency, he declared his government policies to be religion-inspired. However, Morsi quickly realized that the economy, not religious ideology would be his immediate challenge. With his presidency in its infant state and after two years of political instability, tourism as Egypt’s main revenue dried out while the incessant strikes also crippled other economic sectors.

Traditional donors to Egypt, Saudi and Emirates, ceased financial aid to undermine Morsi, who represented an ideological threat to their version of political Islam; however, Qatar came to the rescue with a fresh cash injection. Qatar’s Emir’s aspiration to transform his small country into a major regional political player explained its gesture, but it alienated traditional allies in the Gulf region.

Morsi’s handling of the economy proved its limitations via energy shortages and resulting power cuts affecting Egyptians. Long petrol station lines happened daily. The state apparatus cadre appointed under Mubarak remained intact for the most part and due to their traditional hostility to the Muslim Brotherhood, they deployed state resources to undermine Morsi. At the same time, the judiciary’s Supreme Court, nominated under Mubarak, were also anti-Morsi. The right-leaning media assisted the effort with its rancorous criticism for the newly-elected government. On top of everything else, the defeated Shafiq’s loyalists intensified their daily protests.

Morsi’s early demise was trigged by issuing a presidential decree enabling him to circumvent the Supreme Court on certain matters, which the judiciary declared unconstitutional. As a result, some of media dubbed Morsi the “new Pharaoh.” By then all conditions were ripe for new waves of protests which called for the removal of Morsi by the military. The elected president’s political inexperience rallied former adversaries together – the Mubarak loyalists and revolution activists who felt their revolution had been high-jacked. Morsi loyalists performed counter-protests, waving the banner of Shareaya (legitimacy through elections). Over the course of several weeks, these activities brought the country to a state of paralysis.

The SCAF, who, a year before, had reluctantly acquiesced to Morsi, now seized the opportunity to regain political relevance. Sissi, nominated by Morsi as a moderate general, threatened the president on air with an ultimatum to resolve the crisis or to face consequences. The president did not give in, relying on the legitimacy of his presidency through elections. But the military, unimpressed by his stance, deposed him and detained him at a non-disclosed military base.

After deposing Morsi, SCAF handpicked civilian Adly Mansour and Sissi as Interior Minister to lead the “new government.” Needless to say, Sissi was de-facto leader. Under the banner of tackling terrorism, the new regime cracked down on Morsi supporters in Rabbaa Square.

Once the military found its way back on the political scene, its force against civilian protestors became more brutal than during Mubarak’s rule. Morsi’s loyalists camped by the thousands for months in Rabaa Square. Ultimately, the military issued an ultimatum for them to disperse or be forced out. True to its word, they advanced on the camps and violence erupted. The number of killed is disputed: over-a-thousand says the Muslim Brotherhood and 800 says the military. In either case, that day will be remembered as one of the bloodiest in Egypt’s recent history.

The military-backed government also went on a campaign to curtail the freedom of press movement. A draconian curfew was imposed and “unfriendly” journalists were arrested. Many television channels were taken off the air and their journalists prosecuted. Even international correspondents did not escape from unsubstantiated arrests.

The Muslim Brotherhood, whose candidate had, a year before, won the presidential election, was declared a terrorist organisation, its leadership was jailed and its assets seized.

The Military’s Own 360-degree Revolution

After deposing Morsi, Cairo’s new chief, Sissi, went on the air to assure Egyptian skeptics that he had no desire to become president, saying that his intervention was necessary to save Egypt from plunging into the abyss. Many did not believe hi words, having seen ex-generals reign over them as kings-for-life: the Nassers, Saddats and Mubaraks.

In fact, slowly but surely, Sissi had a change of heart. Feeling bold and assured of his victory ahead, he did not present much of a campaign platform other than the fight-terrorism-and-bring-back-Egypt-to-its-glory-days mantra. Opposition parties boycotted the elections, including the Muslim Brotherhood. Sissi won the presidential elections virtually unopposed, and consistent with the elections of the prior “kings,” he won over 95% of the votes.

Egypt’s opportunity to become the largest democracy in the Middle East and North Africa, was destroyed by adverse factors, ranging from the ubiquitous military and Mubarak cronies, to Morsi’s inexperience and ideological leanings. Like the rest of the Arab world, Egypt’s rendezvous with democracy was not to be. Democracy, not just about ballots and elections, is long and arduous work, nurturing participants to exercise their rights as citizens, and fulfill their obligations towards the public good.

It has long been argued that the correlation between illiteracy rates and the democratic deficit in developing countries is too strong to ignore. Some say that uninformed citizens are the very reason despotic rulers thrive, although as every socio-political phenomenon goes, the democratic deficit is too complex to attribute it to one single cause. There are external actors at play as well. Unlike the principled speeches by the Global North praising the benefits of democracy, realpolitik takes over when real interests are threatened. Politics are often marketed as a win-win by some, but backroom wheeling and dealing often result in a zero-sum game for others.

Tunisia’s experience has been so far the most lucid in the region. Despite a difficult start, Tunisians are learning the ups-and-downs of the democratic exercise; should they succeed, the mold would be broken.

Meanwhile, the General-turned-President in Cairo is going around the world promoting Egypt’s fresh start at democracy. To him, “denial ain’t just a river in Egypt.”