Rabat - In the past several days, news of the Chapel Hill shooting has quickly spread as the story evolved. On the evening of February 10th, Craig Stephen Hicks killed Deah Shaddy Barakat, 23, his wife Yusor Mohammad Abu-Salha, 21, and Abu-Salha’s sister, Razan Mohammad Abu-Salha, 19. They were in their home when he entered and shot them execution-style. All three university students were active in promoting dental health in local homeless communities and were planning to travel to Turkey this summer to provide displaced refugees with dental care. 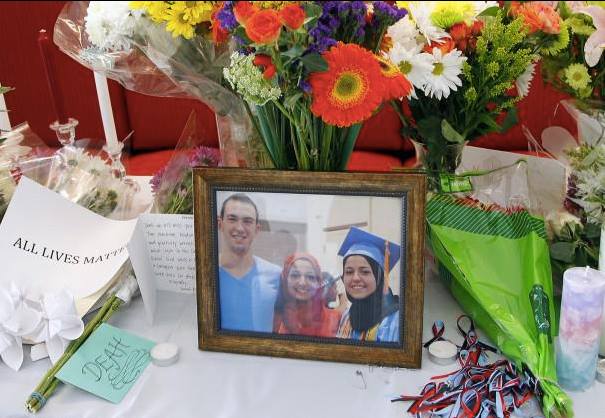 Rabat – In the past several days, news of the Chapel Hill shooting has quickly spread as the story evolved. On the evening of February 10th, Craig Stephen Hicks killed Deah Shaddy Barakat, 23, his wife Yusor Mohammad Abu-Salha, 21, and Abu-Salha’s sister, Razan Mohammad Abu-Salha, 19. They were in their home when he entered and shot them execution-style. All three university students were active in promoting dental health in local homeless communities and were planning to travel to Turkey this summer to provide displaced refugees with dental care.

To understand the shooting and reactions to it, one must understand the town of Chapel Hill, North Carolina. The town revolves around its central university, the University of North Carolina, which has reinforced a strong value for education. The town’s Liberal-Democratic leanings stand out in the middle of a normally Republican state, so it is for this reason that Chapel Hill is viewed as a safe haven of peace and acceptance. Now, while we strive for a tolerant community, this is not to say Chapel Hill has no problems. Its reputation of peaceful, open arms for all walks of life is limited, and Islamophobia, racism, and other types of discrimination are ever-present. The view that a town like Chapel Hill is liberal and therefore lacking in discrimination is not only false, but prevents progress.

The murder of the three students quickly became a controversy rather than a topic of shared mourning. Claims of racial charge in Hicks’ actions were questioned as the possibility arose that the killing was over a parking dispute. The two are discussed as mutually exclusive, even though it’s possible that both religion and parking played a role in the shooting. There are currently numerous factors pointing towards this killing involving the religious beliefs of the victims, however. Stephen Hicks’ Facebook page was full of anti-religious and, in some cases, anti-Islamic posts. He had a major problem with religion, and made claims that atheism could bring peace to the Middle East.

It was reported that, before the murder on February 10th, Hicks had previously harassed the family in their home about parking and had said that he was not comfortable with them because of the way they looked, particularly the women being identifiable Muslims in hijab. His method of killing does not point to anger about a parking place- Hicks killed each student execution-style, one bullet directly in each head.

Disturbingly reminiscent of recent ISIS executions, the murderer was evidently not in an angry rage about parking at the time. This parking excuse feels oddly familiar from other recent cases in which people of color were killed by white men. It seems that, when the situation presents a white murderer, a seemingly-insignificant detail is brought into play. In the Mike Brown case, we were distracted from murder in a debate over whether the boy had recently shoplifted from a convenience store. If the killer had been black, it would have been dismissed as gang violence. Had he been Arab, it would be terrorism, no debate needed.

The media gives white killers reasons to have killed- not excusing them, just straying the story from racial charge. “He was mentally ill,” they claim, “He was angry over parking.” We are only talking about a possible parking conflict because the shooter was white. The possibility that a white man could kill a person just because of his or her race or religion is dismissed, assuming there must have been another reason. Nobody wants to admit to an America where people are killed just because of how they look, so the media portrays it otherwise. To be specific, the national media portrays it this way. International media has called the Chapel Hill shooting like it is: three Muslims executed in their own home by a white man.

As an exchange student in Morocco, I am a bridge between American and Moroccan cultures. The hot topic among my friends here in Rabat these days is university abroad. We often talk about which schools in the US are best for international students and I’ve helped some of them through their applications. In this process, the question of safety normally comes up: Will my Moroccan Muslim friends be safe when they’re in college in the US? Can they wear the hijab, or is it safer to try to blend in?

Answering these questions presents a conflict. On one hand, the chance at an American university education is something many of my peers dream of and work hard for. Making connections in the US presents new opportunities and a life in what many consider the best country in the world, although that is debatable. But, this opportunity presents risks. The fact is that there is a certain level of danger for American-Muslims. Everywhere, and especially in the American Deep South, Muslims are faced with harassment, discrimination, and sometimes violence.

American Islamophobia is largely the result of the attacks of September 11th, 2001. With improper education on the truths of Islam, Americans equate terrorist violence with the general Muslim population. Women who wear the hijab are particularly viewed as oppressed, as the hijab is seen as a forced requirement rather than a Muslim woman’s choice.

In discussing Muslim experiences in America, I am unable to give encouraging news. The treatment of Muslims in the US is inherently worse than that of Christians because of unfair assumptions about Islam. I wish I could tell my Muslim friends here that they needn’t fear for their safety in the US. I wish I could tell them they’d receive the same treatment and opportunities as their non-Muslim counterparts- that they wouldn’t be harassed in the line at the grocery store, but I can’t lie. All of these disparities do exist, and after the Chapel Hill shooting I can’t even tell my Muslim friends they shouldn’t fear for their lives in the United States. If they do, I don’t blame them.

The only words of optimism I can provide to my Moroccan friends planning on studying in the US are words of hope. Muslims in the United States do not receive equal treatment today, but there are communities working to improve the situation- communities where Muslims should feel safe. As a high school student from Chapel Hill, NC living in Morocco where I am surrounded by Muslims I love and respect, my heart goes out to Muslim communities all over the United States who are fearful right now.

I shared mutual friends with both the killer and the victims, and I am ashamed of what happened in my town. While before, most Moroccans I met had never heard of Chapel Hill, they will now know it as the place where three Muslims were executed in their home because of their religion. This shameful event deserves the recognition that it was not one isolated event, but part of a greater pattern of Muslim oppression in the US- a pattern that we must work to fight if we truly care about the value of all lives in America.