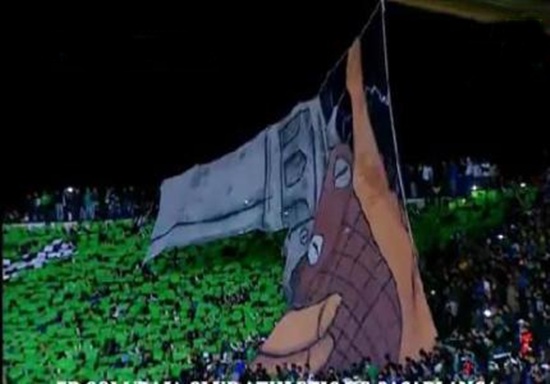 After having said a coup months ago that Morocco had requested to postpone the 2015 African Cup of Nations out of fear that the Algerian national team might won the title on Moroccan soil, the Algerian media continues its attacks on Morocco.

Algerian newspaper Al Nahar said in an article that Moroccan fans threatened to kill Issa Hayatou during a Champions League fixture between Morocco’s Raja Casablanca and the Black Devils from Congo on Friday.

Al Nahar newspaper claimed that Raja Casablanca’s fans’ choreography “Tifo” in which a pistol was displayed in the stands of the Mohammed V stadium during the game was actually directed to the president of the governing body of African football.

According to the Algerian newspaper, the “death threats” came following the CAF’ Executive Committee’s decision to ban Morocco from participating in the 2017 and 2019 African Cup of Nations and to pay millions of dollars in damages to CAF and its partners.