Tunis - The events surrounding the Charlie Hebdo and Hyper Kosher attacks, which have shaken the whole world, have also had repercussions on Tunisia. The country counts six victims in these tragedies, five men and one woman. 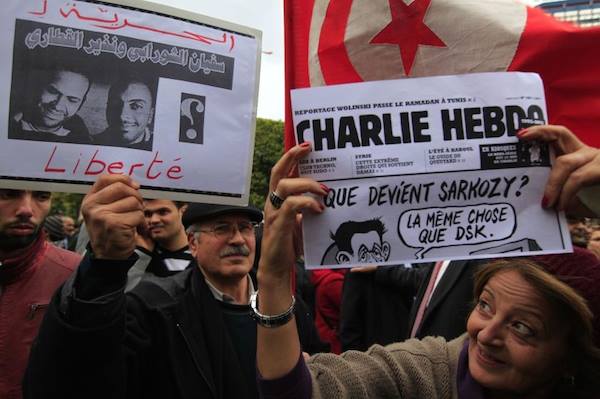 Tunis – The events surrounding the Charlie Hebdo and Hyper Kosher attacks, which have shaken the whole world, have also had repercussions on Tunisia. The country counts six victims in these tragedies, five men and one woman.

The victims, who are all “Tunes” (Tunisian Jew), were shot in Paris during two successive events: the first attack on the headquarters of Charlie Hebdo on January 7, 2015 and then a second attack in Porte de Vincennes on Friday, January 9, just before the start of Shabbat. 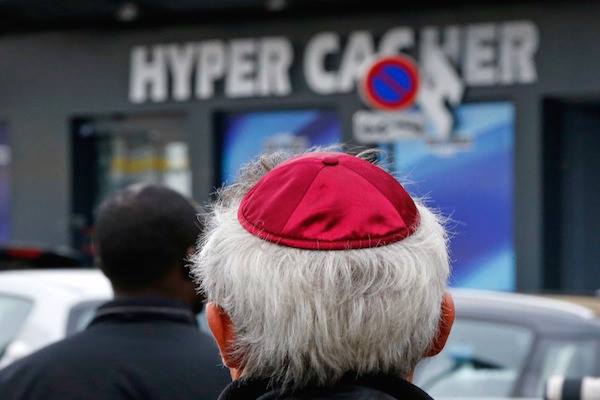 In Tunisia about two hundred people gathered in the Grande-Synagogue of Tunis to show their solidarity with Yoav Hattab, the son of the Grand-Rabbi of Tunis whose family still live in Tunisia. Three channels of communication – the media, the social networks and the streets – have witnessed great turbulence in the country, which has also been affected by the tide of terrorism, not only due to the events which occurred in France but also because of the threats of the so called Islamic State in Libya.

“The plight of Charlie cartoonists had doubly terrified me,” said Souad Chourabi, the mother of Sofiène, a Tunisian journalist held hostage in Libya by the Islamic State. “I spent a day of uncertainty when I heard the news of my son Sofiène’s execution; I was flabbergasted and about to collapse. I couldn’t imagine the bloody scene as told by some media.” “I prayed to God that this was a rumor,” she added. “Fortunately, the President Béji Caid Essebsi received us at the Palace and we were reassured. Both journalists, Sofiène and Nadir Gtari, are still alive.” Libyan sources have also confirmed the information. The drama did not rule out the willingness of journalists to express their solidarity with colleagues of Charlie Hebdo, including those who remain strongly against the content of the newspaper cartoons.

“We are Sofiène and Nadir” and “I am Charlie,” proclaimed the placards that were brandished by some demonstrators, mostly young journalists. Others raised pictures of Sofiène and Nadir. Politicians were also in attendance during this event. The Popular Front expressed its solidarity with the families of Tunisians and French people. The party that has “suffered from terrorism,” especially after the assassination of the Chokri Belaid leaders and Mohammed Brahmi, also participated in the rally to call on all political forces to “unite against terrorism.” “We want to send the same message to the families of Charlie Hebdo.  We, Tunisians, Arabs and Muslims are also against these criminals and they do not represent us,” explained Zouhaier Hamdi, Secretary General of the Popular Courant.

“The attack that occurred at the headquarters of Charlie Hebdo is not legitimate. It has no connection with Islam,” said Walid Abdallah, a correspondent for France 24 in Tunis. He continued, “Extremism can be shown by weapon or by word. The journalist must be free but at the same time responsible. The reporter whatever his or her ideology or religion should take into consideration the importance of the sacred to religious people.”

Surprised by how the successive events unfolded, the chief of the National Union of Tunisian Journalists (SNJT), Néji Bghouri, said, “This psychological war launched by terrorists against journalists of Charlie Hebdo is not going to scare us. We stand for freedom of expression and we are in solidarity with the families of journalists. Was it possible to prohibit cartoonists from imagining and thinking?” Further stating that, “In the words of the British author Evelyn Beatrice Hall in a book on Voltaire in 1906, ‘I don’t agree with you on the essential, nor on the accessory. Nevertheless, I will fight to my last breath to make your voice heard.’”

The institutions that represent Muslims in France, where the events took place, and elsewhere have strongly condemned the attacks outside of the question, “to be or not to be in agreement with the contents of Charlie Hebdo.”

For its part, Morocco condemned the attacks. “The Land of Saints,” as the author Elie Azoulay says, has defended through history its diversity. In its Preamble, Moroccan constitution notes that, “the Kingdom of Morocco intends to preserve, in its plentitude and its diversity, its one and indivisible national identity. Its unity is forged by the convergence of its Arab-Islamist, Berber and [saharo-hassanie] components, nourished and enriched by its African, Andalusian, Hebraic and Mediterranean affluents.” Morocco, which strongly defends its cultural diversity, has once again validated the “Moroccan exception.” Following the tragedies of Charlie Hebdo and Hyper Kosher, many people have asked about the position taken by Morocco during the Republican march. The answer is simple; due to the presence of blasphemous caricatures of the Prophet Mohammed (PBUH), the Kingdom wished to “condemn” but not to “participate.”

These events caused many pacifist and violent reactions. January 7th, was a tragedy but the real tragedies were the reactions that were triggered on the Internet and elsewhere. While some commenters strongly condemned the attack that occurred in the office of Charlie Hebdo, others have given high praise to the perpetrators. All the while, neither the Qur’an nor the old and new testaments have called this behavior. Additionally, more and more commenters have launched into tirades against Muslims, creating an amalgam of religious, extremists and radicals. In each case they are either praising the perpetrators or insulting Muslims; the reactions are stripped of respect for the human being.

“They asked for it,” “They insulted our sacred,” or “they assume that,” “if they accept freedom of speech, they must also accept the freedom of reaction” are just a few examples of comments, tweets and posts that have circulated on social networks.

In the same context, dozens of students from the University of Manouba, in Tunis, held a demonstration on the university campus to denounce the content of the cartoons published in Charlie Hebdo. They “invaded” the Institute of Media and Communication (IPSI) and accused the media of apostasy, “Where are you Muslims? Why don’t you report on our demonstrations?” they asked.

“We are not Charlie. We are against the newspaper’s content,” said Mohrez Abdali, a student at the Faculty of Arts.

While some have taken identifiers that represent them, others were content to follow the herd, while still more people chose to identify themselves with the terrorists by sticking to the label, “I am Kouachi.”

This new phenomenon, “I am,” should be contextualized through a systemic approach, using a theory that integrates the analytic and the synthetic methods of complex systems. Through this approach, which is based on psychology, exploring behavior patterns and human experience, we can analyze these new aspects of communication and non-communication. The above expressions are not always received as they were invented in the first place. The receiver has selectively adopted strategies of hijacking, bypassing and re-appropriation, thus requiring scientific research to identify reception aspects, cause and cognitive effects.

“I am an Abrahamic religion, can unify all of us and avoid controversial debates. We are simply Christians, Muslims and Jews and we are united against terrorism,” said Rosana Jeogertemendes, a Christian from Guinea Bissau and student in Tunisia.