Rabat - UNSG special representative for Libya Bernardino Leon announced, on Friday in Rabat, that progress has been made in the two main topics on the table of inter-Libyan political talks, held since Thursday in Skhirate, namely the national unity government and security arrangements. Inter-Libyan dialogue: progress in issues of national unity govt. and security arrangements, UN emissary 06 March 2015. 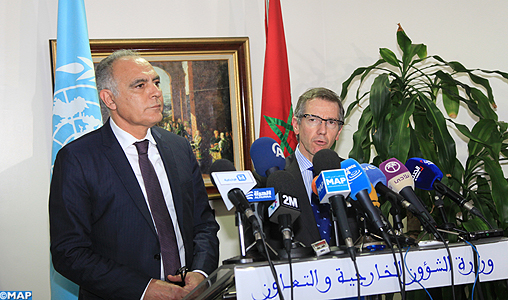 Rabat – UNSG special representative for Libya Bernardino Leon announced, on Friday in Rabat, that progress has been made in the two main topics on the table of inter-Libyan political talks, held since Thursday in Skhirate, namely the national unity government and security arrangements. Inter-Libyan dialogue: progress in issues of national unity govt. and security arrangements, UN emissary 06 March 2015.

“We are making headway in two important issues on the table namely the national unity government and security arrangements, said the UN envoy during a joint press briefing after a meeting with foreign minister Salaheddine Mezouar.

Leon has lauded, earlier in the day, the good and positive spirit of belligerents, and hoped to achieve more in the days to come.

Inter-Libyan talks are a historic event as it is the first time all belligerent parties’ representatives come together to talk following a first meeting recently in Ghadames (south of Libya), he added.

On his meeting with Mezouar, the UN emissary said it was an opportunity for the UN to thank, on behalf of the secretary general, HM King Mohammed VI and Morocco, adding that the Kingdom, a country of dialogue, democracy and openness, played an extremely important role in these talks.

Mezouar said that, since the deterioration of the situation in Libya, Morocco spared no effort to contribute to bringing viewpoints closer and supporting a constructive dialogue to preserve Libya’s unity and stability.

Hoping that the said parties reach an agreed political solution, Mezouar underlined that the Arab Maghreb, the Arab world and the Sahel, as well as the Mediterranean zone need a unified and stable Libya.

The meeting was attended notably by minister delegate for foreign affairs Mbarka Bouaida.