London - On this International Women's Day, let’s celebrate and know the lives of the Palestinian women who face racism, discrimination, theft, and death, in their own homes and land. The women who live their lives with no certainty that the child they sent to school will return to them. The women who sleep fully clothed in case in the middle of the night they are asked to evacuate their homes for demolition. 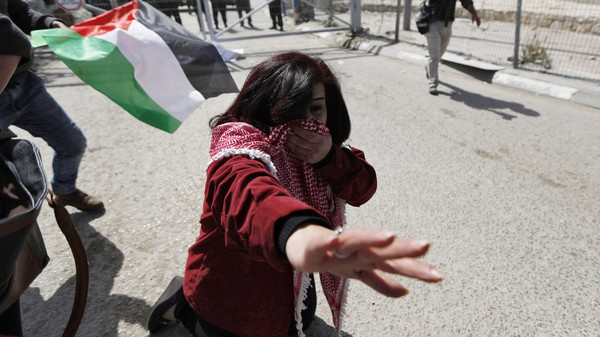 By
Koos Mohammed
-
Koos Mohammed is a freelance writer and a human rights activist based in London.
Mar 8, 2015
Spread the love

London – On this International Women’s Day, let’s celebrate and know the lives of the Palestinian women who face racism, discrimination, theft, and death, in their own homes and land. The women who live their lives with no certainty that the child they sent to school will return to them. The women who sleep fully clothed in case in the middle of the night they are asked to evacuate their homes for demolition.

They are artists and activists who refuse to die silently. They are mothers and grandmothers who carry the pain of lost children and lost homes.

Let us know single mothers like Hana al-Naqib, who watched her newly built home demolished. “After they demolished the home, I tried to lift my children’s morale and motivate them to study harder and do well at school. But all the hopes of a better future that this home restored to them have been squelched and bulldozed along with it,” she told Eletronic Intifada.

They are artists, like my friend Laila Kassab, who find a way to create beauty and hope out of the destruction and despair that surrounds them.

The last I’ve heard from Laila, she told me her home was flooded, and she was having difficulties keeping her children warm. Laila is a young artist living in the besieged Gaza Strip.

Despite a difficult life in Gaza, Laila is full of hope, for her family, and for her people and country. Her colourful paintings convey hope, love, music, and motherhood, as well as the loss and pain that many Palestinians carry.

Of her work, Laila tells us: “At home, in the streets or on the television stations; there exist a great number of issues that require a bigger heart to accommodate all this grief. Many have not fulfilled their dreams because they died in the war on Gaza. I am a calm and measured woman. But when entire body erupts over something, my heart beats with fervour, I mix my colours with my senses; and so I give the white of my canvas the meaning of life. I draw faces that carry the daily worries, stories of people pained by their longing, dreams under the rubble, and dreams of mud, of light and of dust. I cannot divulge all secrets in one painting! A painting might only carry one secret. There, when you discover it, you feel calm, despite your unconscious eruption. The beauty of it, is that there you will find countless contradictions.”

Let’s know the countless young women standing up to their oppressors, at the risk of imprisonment and death, like young dancer and media student Lina Khattab, who was charged with “throwing stones” and “participating in an unauthorized demonstration” in December last year.

Lina is currently held in Hasharon prison in Israel, her family has been denied access to enter Israel, to see her. She’s held with over 20 other Palestinian women and girls.

Let’s know and celebrate the lives of these sisters who face adversity with resilience.

Koos Mohammed is a Freelance Writer and a human rights activist. She lives in London. Photo by Reuters