Rabat- The March 8 women's demonstration in Rabat, Morocco, was impressive. The organizers and the official authorities will report different figures, as usual. An informal and conservative assessment would, however, be that they were in the upper tens of thousands, which is far from the one million called for by the organizers. 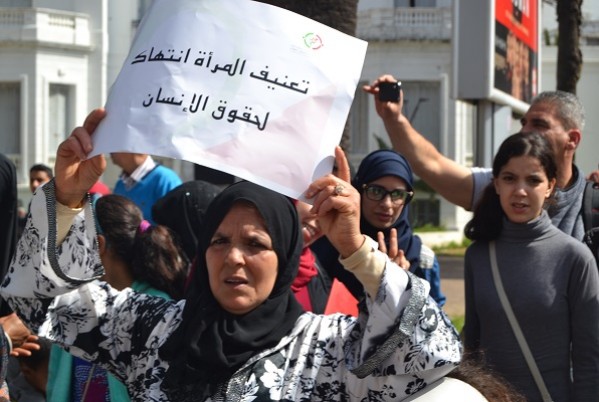 Rabat- The March 8 women’s demonstration in Rabat, Morocco, was impressive. The organizers and the official authorities will report different figures, as usual. An informal and conservative assessment would, however, be that they were in the upper tens of thousands, which is far from the one million called for by the organizers.

The organization of the event was also impressive, given the tremendous amount of coordination it must have taken among groups that do not usually cooperate to bring activists from all over the country. Likewise, political differences were too few and too minor to be mentioned, and the overall management and supervision of the demonstration is to be commended. Slogans were freely expressed, although they tightly complied with the agreed upon watchword.

The driving theme of the women’s march in Rabat was parity. Among the other recurrent themes in the slogans were equity, equality, fairness, equal opportunity, the end of misogynistic government, and the destitution of the Prime Minister.

The interviews given by the leading figures of the organizing teams repeated that the current government is “womenophobic”, that it distorts Islamic principles, and that it adopts an abusive interpretation of Islam’s founding texts to impose illegitimate and anachronistic limitations on women’s social, political, and cultural rights, and on the dignity they are entitled to.

The current government continues to reject the concept of marital and domestic abuse. Despite the comfortable majority it enjoys in the parliament, it has been unwilling to activate provisions of the constitution by enacting laws that protect women and guarantee their rights.

According to these interviews, the government’s decisions to create benefits for poor widows and divorced and deserted women is a populist electoral propaganda for upcoming elections. They denounce this political opportunism and the immorality of this discourse at the eve of the elections.

For the women I have been able to talk to, they said that they continue to be the most vulnerable population to the powers of the economy and finance, both in urban and rural areas. They are the first to suffer from economic crises and all kinds of shortages, and they are the first to lose benefits. They are still the most illiterate category of the population. Women with handicaps are in much worse situations than males with similar handicaps.

Naturally, men supported the Moroccan women. In fact, there were probably as many men at the march as women. Many families, parents, and children of all ages marched together. There was also the noticeable support of foreign residents in Morocco. Sub Saharan Africans, Europeans, and others were also present in the demonstration.

Regardless of where one stands, Moroccans should be happy that such an event is possible in their country. Freedom of speech and peaceful demonstration in the streets of the capital city is not what you would call a normal thing in the region. Law enforcement supervision is also to be commended, present but discrete, visible but not repressive, professional and supportive.