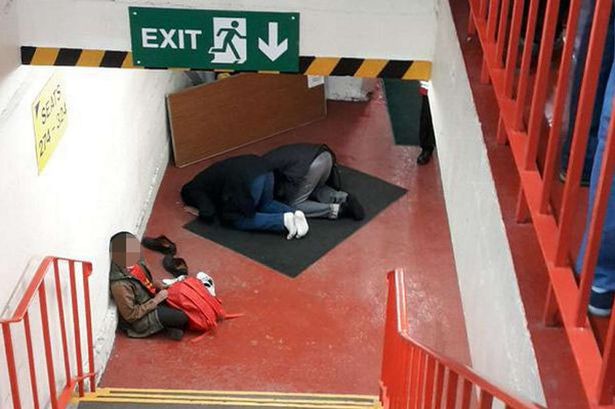 Stephen Dodd wrote alongside the image that he posted- which was deleted- “Muslims praying at half time at the match yesterday #DISGRACE.”

Later on, Dodd posted another tweet saying, “this country is fucked”

Seen it all now 2 Muslims praying at half time at the bottom of the main stand at half time today this country is fucked.

Twitter users and others who identified themselves as Liverpool fans were quick to condemn Dodd’s “racist” statement. Dodd’s remark triggered a lot of responses. Some twitter users even called him “idiot”, “mong”, “bigot” and other insulting words.

Disgrace? Why? What is so disgraceful? Idiot. @stedoddnew — Ryan (@RyanMcTrippy) March 9, 2015

@stedoddnew you BIGOT. Tell me where you live I’ll come and pray In your HOUSE!

Amid this exchange of offensive words, a Muslim girl in Hijab posted a photo of her pointing to the logo of Liverpool FC with a statement saying, “We’re just human bro. LFC fans too.”

Several Twitter users posted the photo of Emre Can praying before the match.

This Liverpool fan says “a muslim praying in Anfield is ‘disgrace’ for Liverpool. Here’s another one! @stedoddnew pic.twitter.com/MLQpZtnkKO