Casablanca - King Mohammed VI and King Abdullah II of Jordan called for an exhaustive approach bringing together the security, religious and development dimensions to fight extremism and terrorism. 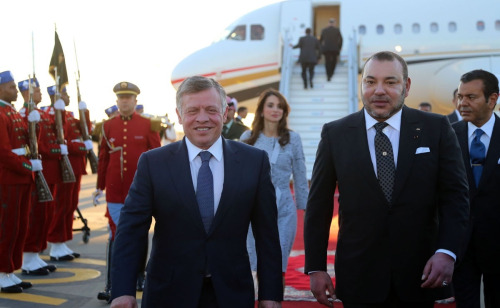 Casablanca – King Mohammed VI and King Abdullah II of Jordan called for an exhaustive approach bringing together the security, religious and development dimensions to fight extremism and terrorism.

In a joint statement after the official working visit to Morocco by King Abdullah II of Jordan and Queen Rania Al Abdullah, the two sovereigns underlined the great interest they take in spurring international efforts to combat extremism and terrorism, regardless of their location, motives and forms, through an exhaustive approach bringing together the security, religious and development dimensions.

They stressed the pressing need to foster solidarity among Arabs and close their ranks, in the light of the political and security challenges facing the region in order to counter these dangerous plagues which threaten the security of Arab and African countries, as well as the rest of the world.

Underlining the inevitability to dry up terrorism sources, the two sovereigns urged Ulema (religious scholars), thinkers and intellectuals to fully fulfill their duties to promote a reasoned and clear religious discourse by referring to the just teachings of Islam such as moderation, openness, tolerance and dialogue.

The two monarchs called upon the international community to double its efforts to find a comprehensive and just solution to the Israeli-Palestinian conflict, based on the Arab peace initiative, the two-state solution and international legitimacy in order to enable the Palestinian people to recover all their inalienable rights, on top of them the establishment on their territory of an independent State with eastern Al Quds as capital.

On the developments of the Syrian crisis, the two kings called for a solution that would allow the Syrian people to conduct the phase of political transition in keeping with the Geneva I Declaration.

Concerning Iraq, they affirmed their support for the current Iraqi cabinet to face terrorist groups which threaten the security and stability of Iraq and the whole region, hoping that the country succeeds in completing the establishment of its modern institutions on the basis of citizenship and the rule of law.

Regarding the situation in Libya, King Abdullah II lauded the holding in Morocco of the political dialogue round between Libyan partners, under the aegis of the UNSG personal envoy for Libya.

The two sovereign voiced their concern over the dangerous developments on Yemen’s political and security scene, urging the different Yemeni parties to resume national reconciliation to preserve the security, stability and territorial integrity of sister nation Yemen.