Rabat - What does the word “bread” mean? According to www.merriam-webster.com, it is defined as a baked food made from a mixture of flour and water. And, while this definition is accurate, any true Moroccan would only shake his head at this greatly over-simplified and culturally empty definition. In fact, from the Mediterranean Sea to the Sahara Desert, and the Algerian border to the Atlantic Ocean, no other food has more importance at the Moroccan table than bread.

Rabat – What does the word “bread” mean? According to www.merriam-webster.com, it is defined as a baked food made from a mixture of flour and water. And, while this definition is accurate, any true Moroccan would only shake his head at this greatly over-simplified and culturally empty definition. In fact, from the Mediterranean Sea to the Sahara Desert, and the Algerian border to the Atlantic Ocean, no other food has more importance at the Moroccan table than bread.

In America, the past few decades have been rough going for bread. From the Pacific to the Atlantic Ocean, and from the southern border of Canada to the northern border of Mexico, bread has gotten a somewhat tarnished reputation. However, despite the harsh criticism by many in America, the massive variety of bread products available in the U.S. would seem to suggest otherwise. As America is a melting pot of people and their cultures, so too is the bread. 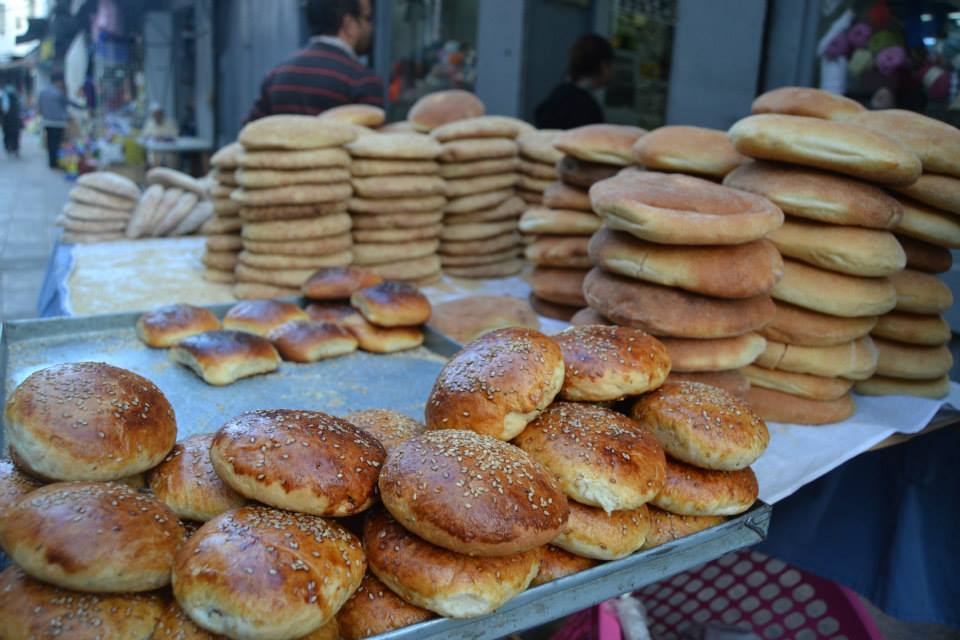 However, unlike the U.S., bread plays a substantial, traditional role in Moroccan daily life, starting with who makes it. Until the 1980’s, almost all Moroccan women made their own bread, sometimes twice daily. It begins with the making of the dough, combining and mixing the ingredients to form the traditional sticky mess. The next step takes the raw dough and transforms it into a ready to bake product. After carefully kneading the raw dough, shaping the loaves and placing them onto a baking sheet, the women would transport the dough to a communal oven for baking. However, it was and still is common for her child to take it, often carried on his or her head.

Today, although tradition has given way to home ovens, most communities still have an operational communal oven. In addition, the faster-paced lifestyle in big cities has resulted in a wide availability of store-bought bread. But regardless of its source, you can be sure that bread is a staple in every Moroccan home and restaurant.

In the U.S., bread has rarely been baked at home since the 1950’s. Today, homemade bread is generally made by dumping the contents of a “bread mix” into a “bread machine,” adding a cup or two of water and pressing “start.” But most people don’t even go to that trouble because basic loaves of bread are sold everywhere. If you take the bit of extra time to go to a specialty store that sells bread, of which there are many, you will find a massive variety available. And although variety suggests popularity, for decades there has been a war of sorts on bread – many health enthusiasts frown upon its high carbohydrate levels and call it unhealthy.

While Morocco does not have a great variety of breads, it has a few monumentally fantastic signature breads. Although bread in Morocco is principally made from durum wheat semolina, there was a time when the Berbers of the Rif Mountains once sustained themselves almost solely with barley flour products. Bread is often flavored with herbs and spices, with anise (“licorice” flavor) and cumin seeds being the two most popular additions. The most popular bread in Morocco is Khobz and it is consumed with almost every meal. Although there are many variations of Khobz, there are some features that remain constant, such as it has a round shape and is about 1 to 2 inches (2.5 cm to 5 cm) thick in size. 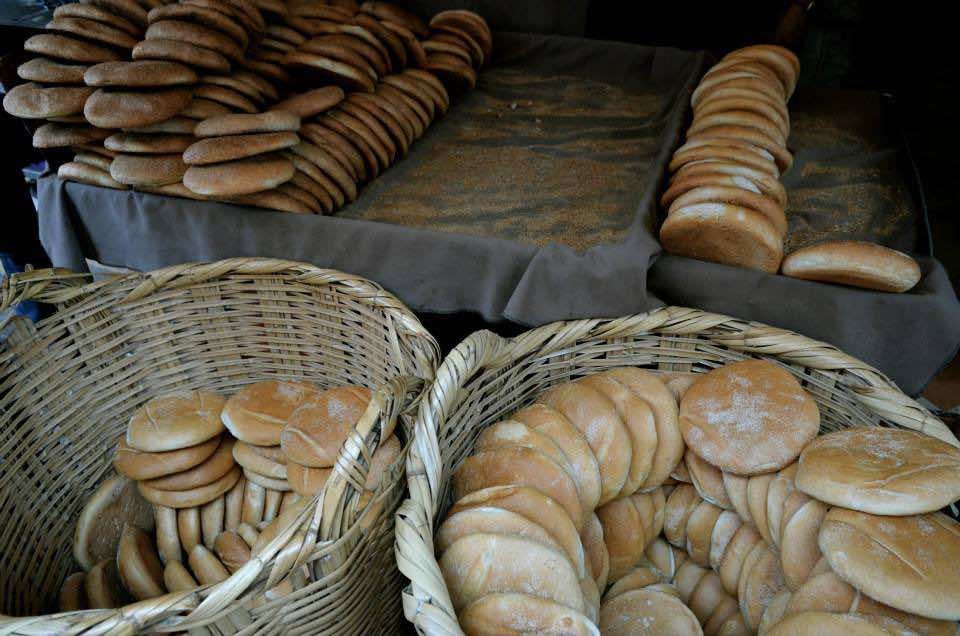 The U.S. is not known for any unique style of bread and in fact has adopted and prides itself on its wide selection of international offerings, irregularly shaped artisan loafs, unique flour bases such as spelt, rice and buckwheat, and many different kinds of yeasts based breads, such as “sour dough.” It would also not be surprising in the U.S. to see green bread on St. Patrick’s Day, orange bread for Halloween or red bread for Valentine’s Day.

Moroccans eat bread with the three traditional meals every day and a snack before dinner (called Cass-Croot). However, in Morocco, bread is much more than a side item to be consumed with the meal, it is also used (almost solely) as the utensil with which you eat. Most meals do not include forks, spoons and knives at the table, but these are seldom missed. Bread is used as a “spoon” to sop up soups and stews, as a scoop for dips, beans or sauces and as a substitute for the tines (prongs) on a fork for fried eggs, meat and other fork-worthy dishes. Using bread to eat seems to be a very efficient, albeit it adds substantially to the meal. Also it is certainly more fun and there is less cleanup as you get to eat the “fork” and “spoon” instead of washing them!

Bread is very often the center of a traditional Moroccan breakfast. Typically, breakfast consists of “comer” (a baguette), khobz, or harcha (corn meal bread) as the centerpiece. You merely add olive oil, Jebli (akin to cream cheese), honey and/or jam and with a side of coffee, you have a meal!

Between noon and 2 p.m., people tend to eat the biggest meal of the day. In most places, family members come home from school and work to eat together (share bread). And of course, bread often takes the place of fork and spoon to consume whatever might be served.

Cass-croot is a late afternoon snack, generally served to tide you over until dinner, which can be very late compared to American standards. It generally consists of a crepe/pancake-like round called beghrir and milowi, a flatbread without crust and is served with honey or cheese. Sometimes milowi is fortified with beef fat and onions, like a pizza (yummy!!). Of course there are many other offerings for this snack time that vary greatly and deserve their own article. But, honorable mention must be made of the Moroccan freshly fried beignet that beats a pre-made Krispy Kreme donut any day. All of these items are served alongside the always present sweet, mint tea.

Whether the inside is a hamburger, fish or just vegetables, bread is the base for sandwiches, which is perhaps the number one meal at lunch-time. At dinner time, in the U.S., bread may or may not be part of the main meal. More likely than not, if bread is served with dinner, it is in the form of a biscuit, roll or croissant. 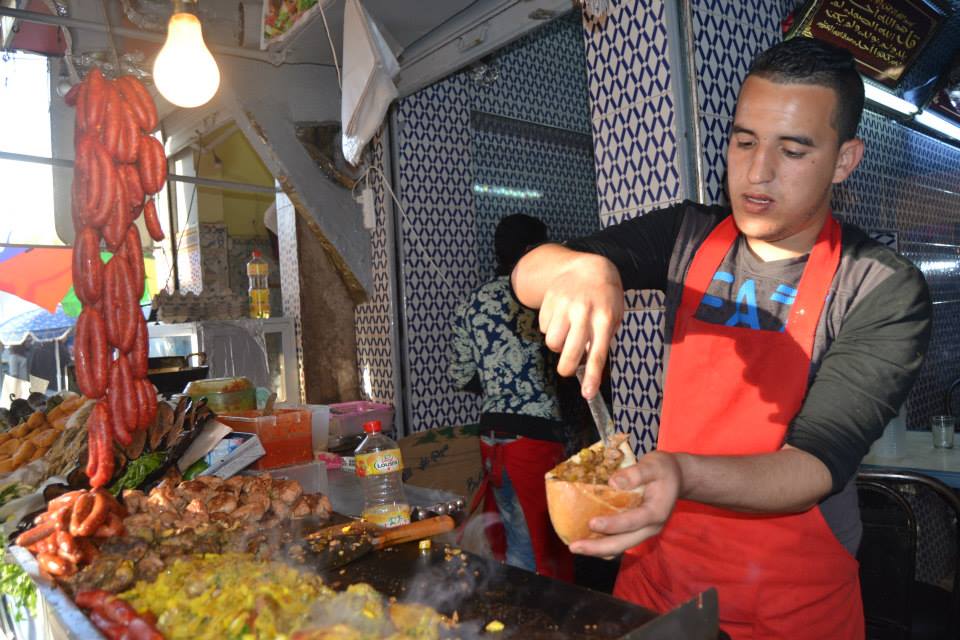 Bread is never wasted in Morocco. It is treated with respect, and to throw it in the trash would be a sin. At home, if dropped on the floor or left on the table after a meal, it is either used again for another dish or given to someone else. If it is found outside on the ground, it is picked up and placed in a safe spot off of the ground. This placing of the bread is a sign of respect for it and more often than not, the birds are very happy about it. At the market, you can sell your old and stale bread to a vendor for about 2 Dirham (20 cents) per kilo (2.2 pounds). The vendor will recycle the bread to make feed for animals.

The importance of bread in Morocco is obvious just by the fact that the government makes sure it is affordable. In May 2014, www.aljazeera.com reported that 20% of Morocco’s budget was spent subsidizing the cost of bread.

Having lived among and dined with Moroccans, we can attest to the fact that the scrumptious taste of the bread, just baked by “mama,” dipped into some fresh olive oil cannot be beat. When we leave this country, one thing we will miss greatly is the family sitting around a giant lamb tagine dinner, “mama” lovingly tearing the warm khobz into uneven wedges, plopping them down in front of us all and saying “akul! akul! akul! (eat! eat! eat!)