Rabat - A delegation from the American Jewish Committee (AJC), a leading global Jewish advocacy organization, hailed Morocco's economic and political progress and its security partnership with the United States of America. 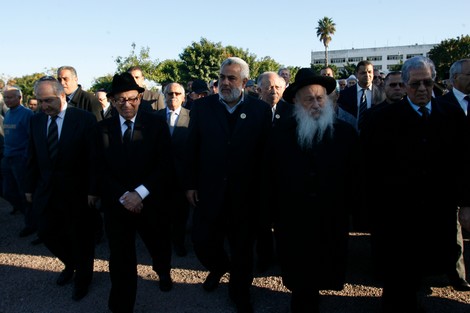 Rabat – A delegation from the American Jewish Committee (AJC), a leading global Jewish advocacy organization, hailed Morocco’s economic and political progress and its security partnership with the United States of America.

In a meeting with Chief of Government Abdelilah Benkirane and other senior Moroccan officials, the 12-member delegation conveyed messages of support for the efforts of King Mohammed VI in combating extremism and advance regional peace and prosperity.

“In an era of turmoil across the Arab world, Morocco, an exemplar and defender of moderation, plays an increasingly vital role?,” said Jason Isaacson, AJC Associate Executive Director for Policy.

The American Jewish Committee reaffirmed its support for Morocco’s territorial integrity of the historic kingdom, including its sovereignty with local autonomy in the Western Sahara region.

AJC expressed support for Morocco’s security and its strategic cooperation with the United States and participation in the anti-ISIS coalition.

The delegation also expressed solidarity with the two-millennia-old Moroccan Jewish community, and met with its leaders and visited Jewish sites in five Moroccan cities?.

The American Jewish Committee was established in 1906 to enhance the well-being of the Jewish people and to advance human rights and democratic values for all.