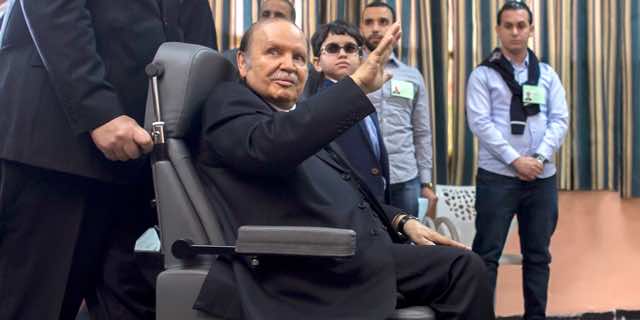 San Francisco – Algeria’s friends and foes cannot help but feel sorrow and disgust for the trap set for the Algerian people by their own regime, and even worse, its inability to stop the Hogra, or contempt from officials, that the majority of Algerians live with.

One of the most mind-boggling and incomprehensible aspects of 2014 Algeria is its presidency, which has repeatedly ashamed the Algerians who care deeply about their country. Algerians have a strong aversion to non-Algerians, like me, pointing out how their regime is squandering their daily life.

They don’t need to listen to me. Here is what a well known Algerian author, journalist, and finalist in Prix Goncourt said when Bouteflika decided to reelect himself for the fourth time, and thus assuring he dies in office.

“Shame upon you, Bouteflika! You have no shame for our martyrs, for your age, for your own sickness, for what you have done to this country… You have humiliated us… You push us into exile by taking our country from us… What do you want? More money? More gold? More praise? More glory? We will give them to you. Just name your price… Why do you want to carry your country to your grave? To bury our nation alive with you?”

This author is not the only Algerian who feels ashamed and powerless with what is taking place in his dear homeland. The majority of Algerians feel the same about their country being hijacked by a ruthless military regime, led by a vindictive wheel chair-ridden “president” whose only goal is to stay in power by any means necessary.

Algeria has become Africa’s largest arms importer. By splurging on weapons, this ruthless regime hopes to accomplish three goals: intimidate their neighbors, profit from the purchase transactions of military equipment, and, most importantly, use it to control their own people.

We all witnessed in the last presidential electionshow the police force outnumbered the protesters. The Algerian regime has allocated 13.1 billion dollars of their budget to the defense sector in 2015, in addition to 6.95 billion for so-called homeland security. It’s more like regime security, because despite this astronomical spending, terrorism is still alive and kicking in Algeria.

Morocco’s Foreign Minister, Salaheddine Mezouar, could not have phrased it better when he called the Algerian regime “pathetic”. Instead of finding a way to diminish the problems that Algerians face on a daily basis, the regime instead tries to mobilize all their resource to defeat Morocco, as it has for more than fifty years.

Other than the pitiful regime and its backers in the mediocre Algerian media, Algerians do not care if Crans Montana or the inter-Libyan peace talks are taking place in Morocco or anywhere else. What the regime has done, despite failing to stop these meeting from taking place in Morocco, is nothing short of obsession.

The Algerian regime prides itself as the peace broker in the region, and has spent an eight-month marathon hammering out a deal that Mali’s Tuaregs called “fundamentally flawed”. Only the Malian government signed the agreement, along with some northern pro-Bamako armed groups.

With Morocco, the Algerian regime does exactly the opposite of what it preaches in Mali: it supports the Polisario over the people and the government of Morocco.

The Algerian regime believes that it is a power to be reckoned with on the world stage, but when Algeria invited fellow oil producers to work together on oil prices, only Angola’s oil minister and Nigeria’s ambassador made the trip to Algiers. Saudi Arabian oil minister Ali al-Naimi received the invitation but didn’t even respond, and the other Gulf states simply followed suit. The plunge in oil prices forced the cancellations of several projects, and the worst has yet to come. Perhaps then the Algerian people will have no choice but to evict the gangs in the halls of El Moradia and the DRS.

Moroccan decision-makers should continue forging ahead with democratizing the country. It is understood that the process is slow and arduous, but nevertheless Moroccan leaders should keep their eye on the ball and never relent.

Let’s hope the best for the people of Algeria, with whom sooner or later we will unite, and hopefully sooner rather than later.