Rabat - A high school in upstate New York has apologized for reciting the US Pledge of Allegiance in Arabic. 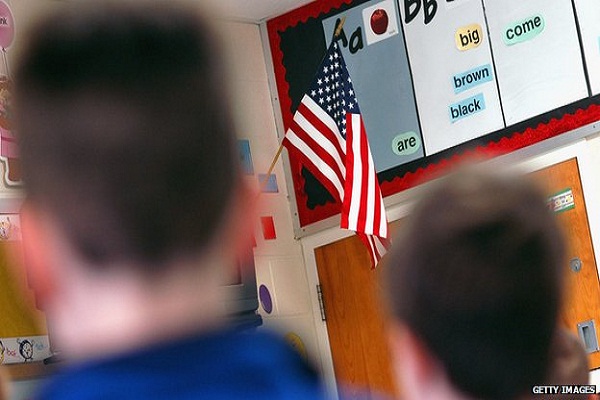 Rabat – A high school in upstate New York has apologized for reciting the US Pledge of Allegiance in Arabic.

The pledge was read in Arabic in an effort to celebrate National Foreign Language week at Pine Bush High School, 65 miles northwest of New York City.

However, the school has apologized after receiving complaints from district residents who had lost family members in Afghanistan and from Jewish parents.

The Arabic reading of the pledge has “divided the school in half”, District Superintendent Joan Carbone told the Times Herald-Record of Middletown.

The school’s foreign language department had also arranged for the pledge to be read in a different language each day for a week.

Some students, however, were angered and responded to the announcement with catcalls and angry denunciations.

“The intention was to promote the fact that those who speak a language other than English still pledge to salute this great country,” the district said in its statement.

Students took to Twitter to voice their anger regarding the decision.

One of them said: “People who don’t like PB should take a vacation. I hear the Middle East is nice this time a year?”

Another student tweeted, “The pledge should always be said in English. They could’ve just said “Good Morning” in a different language each day.”

A student who supported the reading said she felt it was “wrong to discriminate – the whole thing is wrong.”

Joan Carbone said the Pledge will be read in English only from now on.

The New Yorker chapter of the Council on American-Islamic Relations also commented on the issue.

The council’s spokeswoman, Sadyia Khalique, said that “when a simple student activity designed to promote mutual understanding receives such a negative reaction and the school in which it takes place is forced to issue a public apology, all Americans who value our nation’s history of religious and ethnic diversity should be concerned.”