Taroudant - A Moroccan young girl stunned the audience after pulling a Mercedes-Benz weighing one-and-a-half tone with her hair. 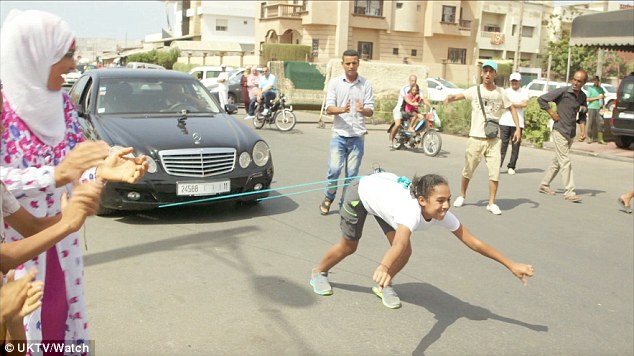 By
Larbi Arbaoui
-
Larbi is a freelance writer and assistant editor at Morocco World News.
Mar 22, 2015
Spread the love

Taroudant – A Moroccan young girl stunned the audience after pulling a Mercedes-Benz weighing one-and-a-half tone with her hair.

Representing Morocco for a new reality TV show ‘World’s Most Talented’, Ikram Salhi showcased her exceptional strength and talent when she dragged the Mercedes-Benz across 32ft of flat road.

Ikram Salhi, who made Morocco proud in the event of an English reality TV show, wants to realize the dream of becoming the strongest girl in the world.

‘I’m proud to honor Moroccan women, and I hope to be the strongest woman in Morocco.’

This is not the first time Ikram pulled a car with her hair. She said that “the heaviest item she has ever pulled was a 4×4 Range Rover.”

After accomplishing successfully this challenge, Ikram will go head-to-head against a competitor from Germany in a show on April 28 at 9pm on the UK TV channel Watch.