Rabat - Egypt's top court has affirmed the imposition of a five-year prison sentence for a radical preacher convicted of publicly burning a copy of the bible next to the US Embassy in Cairo in 2012. 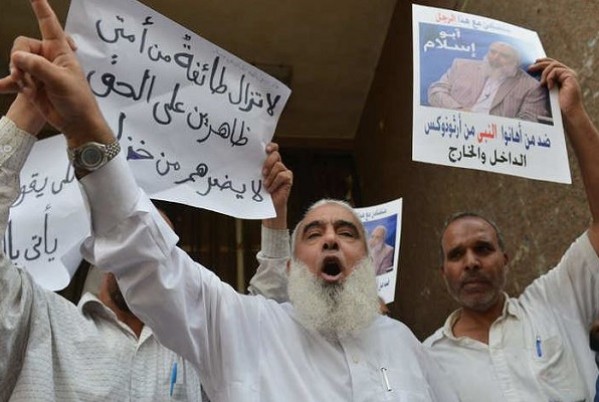 Rabat – Egypt’s top court has affirmed the imposition of a five-year prison sentence for a radical preacher convicted of publicly burning a copy of the bible next to the US Embassy in Cairo in 2012.

Egypt’s radical TV preacher, Ahmed Mahmoud Abdallah (aka Abu Islam), was sentenced on charges of contempt of religion, destroying a religious text, and disturbing the public peace and security.

In September 2012, the ultra-conservative preacher reportedly burned a copy of the Bible during a demonstration outside the US Embassy in Cairo against the “Innocence of Muslims,” a US-produced film that depicts the Muslim prophet Mohamed in a disparaging way.

In an earlier ruling, Abu Islam was sentenced in June 2013 to 11 years of hard labor on charges of blasphemy. His son was sentenced to eight years in prison for the same offense.

The court rulings, meanwhile, were suspended pending an appeal by the preacher and his son.

The preacher, who is also the owner of the now defunct Al-Umma satellite channel, appealed his conviction, but his appeal was rejected by the Egyptian court of appeal.