Istanbul - There has been no peace in Libya since 2010. The main reason for the conflict is oil revenues. 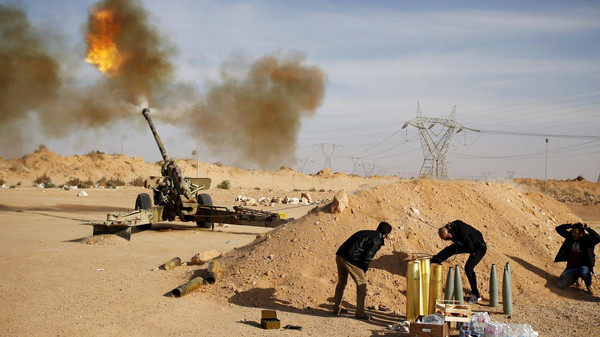 Istanbul – There has been no peace in Libya since 2010. The main reason for the conflict is oil revenues.

Libya saw the bloodiest revolution of the Arab Spring.

Oil production, which stood at approximately 1.6 million barrels a day before the 2011 revolution, is today far below that.

Natural gas and oil make up 96% of the country’s total revenues.

The most important customers of this sector that involves millions of people are Italy, Germany, Spain and France.

Now a new force has appeared in Libya, where EU countries engaged in power struggles for many years – ISIL.

ISIL has announced its presence, not only in the Middle East but also in Africa. Ansar al-Sharia took an oath of loyalty to ISIL in Libya before Boko Haram did the same in Nigeria. After that, ISIL announced its presence in Libya by killing 21 Egyptian Copts and threatening to send migrants over to Europe; they claimed they would send the 500,000 to 1 million migrants waiting on the Libyan coast to Europe if they intervened against ISIL in the country.

France and Italy, which are now close to ISIL by way of Libya, and also Germany and Spain were the countries that were most active against Gaddafi in the revolution of 2011. The important thing is that these four countries are to whom Libya exports most of its natural gas and oil.

Gaddafi played an important role in the financing of these countries, not just with exports but also with investments and cash reserves.

But things changed quickly. During the revolution, NATO declared a no-fly zone over Libya and thus prevented Gaddafi from taking steps to intervene in the revolt with airstrikes, and more interestingly France was the first country to strike at Gaddafi, with whom it had been hand in glove for many years, without even waiting for the NATO intervention. These interventions and their aftermath spelled devastation for Libya rather than liberation.

In truth, some of the reasons for the failure to establish peace in Libya after Gaddafi concern the nature of the decades of the Gaddafi regime.

Conflicts persist between the peoples in the east and west of Libya because of the presence of large numbers of tribes and blocs, and this raises the question of the establishment of federal mini states. The different communities demanding freedom in Libya today all lived together under repression in Gaddafi’s time. The absence of a government in the country is making things much easier for the separatists.

Another reason for the failure to establish social peace in Libya is the staggering amount of weapons floating around the country.

Libya has the largest number of weapons per capita in the whole world;   these weapons were handed out to the people during the revolution and simply never collected back again. The fact that these weapons fell into the hands of tribes, foreign fighters, revolutionaries and radicals is one of the main barriers to the country’s future. The lack of a leader in the country and the persistent and prolonged failure to establish a central government, also result from Gaddafi’s policies during his four decades in power. It must not be forgotten that Gaddafi ruled Libya alone, as an absolute ruler. There was not the slightest opposition to him.

The population gained no experience of administration during the Gaddafi era. The emergence of opinion leaders was prevented. Some opinion leaders were killed in exile, and thus a serious leadership problem in Libya has now made itself all to apparent.

A Libya wrestling with all these problems is now facing a real threat – ISIL.

As an extension of its strategy of seizing control of the oil infrastructure in the Kurdish part of Iraq, Mosul and Kirkuk, as well as Raqqa in Syria, ISIL is now attacking economic and strategic targets in Libya. It first attacked the oil-exporting port of Hariga in Tobruk. It then attacked Total’s Mabruk oil field. Most recently it attacked Sirte, known as the ‘oil crescent.’

The first priority for Libya today is to abandon its mentality of tribalism and regionalism and to establish a joint compromise coalition government under U.N. observation that will enjoy the support of the international community. The climate of disorder and insecurity in the country serves only the interests of armed groups and criminal organizations. The first priority for these organizations is the country’s oil networks, and if they can secure control of that, they will put Libya out of business. The persisting climate of conflict also makes life easier for radical organizations.

The priority for the government or coalition to be set up must be to establish security by preventing people from arming themselves in the country. Once peace and order have been established, legal steps must be taken to permit free elections. U.N. observers or international mediators must support the transition to democracy. A specially constituted U.N. force must help with the collection of weapons.

Of course, in order for all this to happen, the sides must abandon their tribal mentality and agree to live together in tolerance and understanding as Libyan Muslims.