Sharm el-Sheikh (Egypt) -  The 26th ordinary Arab Summit opened, on Saturday in Sharm el-Sheikh in Egypt, with pressing issues on its agenda as the crises in the Arab World, security issues and the need to reinforce joint Arab action. 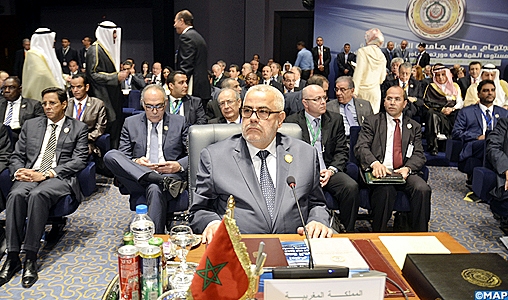 Sharm el-Sheikh (Egypt) –  The 26th ordinary Arab Summit opened, on Saturday in Sharm el-Sheikh in Egypt, with pressing issues on its agenda as the crises in the Arab World, security issues and the need to reinforce joint Arab action.

The Summit, held under the chairmanship of Egypt, is attended by Kings, Emirs and Presidents of 14 countries, while 6 other states will be represented by their heads of state, parliament speakers, foreign ministers or personal representatives.

Syria will not be attending the event given that the Arab League has suspended its participations in pan-Arab meetings.

King Mohammed VI will be represented in this Summit, which will run until Sunday, by Head of government Abdelilah Benkirane.