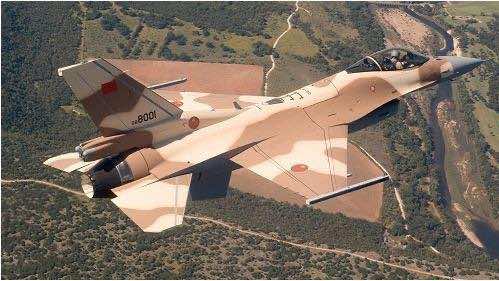 San Francisco – Morocco is assisting Saudi Arabia in its air campaign against rebel forces in Yemen by providing jets and pilots, and said that its commitment to the defense and security of its sister kingdom Saudi Arabia, the Holy Mosques, and other countries of the Gulf Cooperation Council (GCC) is of paramount importance.

Morocco’s joining of “Operation Decisive Storm” sent a clear signal to the Algerians, who are the largest arms importers in Africa, that Morocco has allies and any thoughts that Algeria could outspend Morocco in military hardware in order to defeat Morocco is a just a wishful thinking.

The GCC’s relationship with Morocco is very solid, and has not been shaken for more than 40 years. The GCC will surely come to Morocco’s aid, should Algeria think that purchasing more jets from the Russians is a way to triumph over its neighbor.

The Algerian media is already criticizing Morocco for joining its true allies in the Middle East, stating that instead of forming a coalition to defeat the Houthis in Yemen, who are also Arabs, they should instead get together and go after Israel for killing the Palestinians.

The answer to this imbecile proposition, at least from a Moroccan standpoint, is that Israel has not planned to defeat Morocco for 40 years, as is the case of the Algerians, who are shamelessly plotting the defeat of Morocco day in and day out.

The Algerians tell the world that they will not change their selective doctrine of not interfering in other countries affairs. This could be commendable stance, but what do Algerians call their interference in the Moroccan Sahara?

Morocco has done the right thing in joining the coalition. Of course, no one is fool enough to believe that Morocco joined to defend the integrity of Yemen. Morocco joined its friends in the Middle East to let them know that Morocco is serious about their strategic partnership, and also to show the Algerians that Morocco has friends with deep pockets, and for every penny Algeria spends on weaponry, Morocco, with the help of its friends, will not be outspent.

Algeria would be better off spending money to create jobs and improve the life of the Algerian people. Morocco has time and time again asked to turn the page and start a new beginning with Algeria. Unfortunately, this will never happen, due to a conflict of interest. It is not in the interest of the Algerian regime, a regime that embezzles aid to the Sahraowis to mend fences with its neighbor.