Sharm el-Sheikh- Egyptian president Abdel Fattah Sissi received Head of government Abdelilah Benkirane on Sunday, on the sidelines of the 26th Arab Summit which is being held in Sharm el-Sheikh in Egypt. 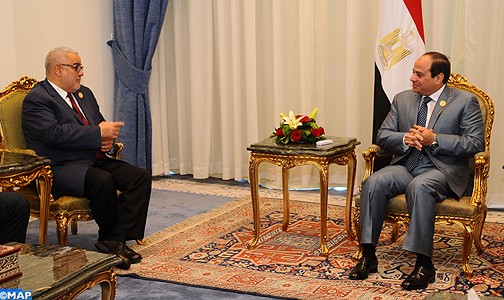 Sharm el-Sheikh- Egyptian president Abdel Fattah Sissi received Head of government Abdelilah Benkirane on Sunday, on the sidelines of the 26th Arab Summit which is being held in Sharm el-Sheikh in Egypt.

Benkirane said, after the talks with Egypt’s head of state, that the friendly meeting was an occasion to discuss the Moroccan-Egyptian ties, the latest developments in the Arab World as well as the two countries’ unwavering stances over the region’s stability.

The meeting is part of reinforcing the historical relations between Morocco and Egypt, and between the two countries’ leaders, said the Head of government who is representing HM King Mohammed VI in the Arab summit.

The 26th ordinary Arab Summit, held on Saturday and Sunday in Sharm el-Sheikh, will examine several draft resolutions related to the Palestinian issue, the situation in Yemen, the Syrian crisis, and the situation in Libya and Lebanon.