Tunis- A Moroccan delegation, headed by Abdeltif Menouni, one of the King’s advisers, participated in the international march against terrorism on Sunday in Tunis. 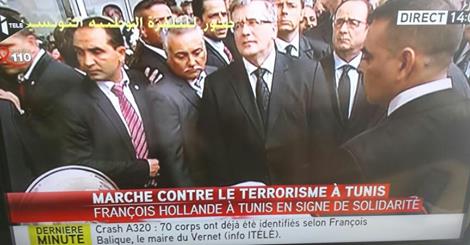 Tunis- A Moroccan delegation, headed by Abdeltif Menouni, one of the King’s advisers, participated in the international march against terrorism on Sunday in Tunis.

“The participation of the Moroccan delegation in this march expresses the active solidarity of Moroccans. We have experienced terrorism, so we know what it is. We came to say together with our Tunisian brothers : No to terrorism,” said Mohammed Nabil Benabdellah, the Minister of Housing, Planning, and urban policy. 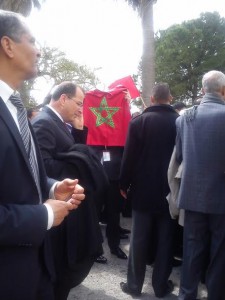 Two marches were held on Sunday. The first march started in Bab Saadoun, not far from Tunis center, and where tens of thousands of Tunisian citizens gathered to march to the Bardo museum, the site of the terrorist attack earlier this month. Several slogans were chanted, such as “no place for terrorism in Tunisia” and “Tunisia is free. Terrorism has no place here. “

“This act that was perpetrated in the Bardo Museum touched me as a Moroccan resident in Tunisia. We support our Tunisian friends and we know that terrorism can not take root as a phenomenon in the country,” said Amal Asri, President of the Mediterranean Center.

The second march was organized at the Bardo museum. Thousands came together in front of the Assembly of People’s Representatives to wait for official delegations, which went to the Bardo museum after being greeted by Tunisian President Beji Caid Essebsi. Hundreds of police officers and soldiers with automatic weapons and bulletproof vests provided security not only at the Bardo site, but also in different areas of Tunis.

“Terrorism has no nationality. Everyone is concerned, everyone is here to say no to terrorism. We are here alongside our Tunisian friends,” said Anis Birrou, Minister of Moroccans living abroad.
Concerning media, in addition to Morocco World News, MAP Agency and 2M also covered the event. Security officers facilitated their access to the site, ensured good working conditions, and accompanied the press to the Assembly of People’s Representatives. 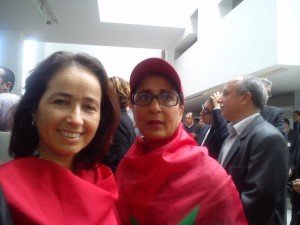 The Moroccan delegation was pleased to participate in this event and to reaffirm the friendship and brotherhood binding the two countries.

“If we do not gather around the principles of tolerance and solidarity, we can not fight terrorism. We are from Morocco, representing different political ideologies to be standing next to our Tunisian friends,” said Driss Lachgar, the first secretary of the Socialist Union of Popular Forces (USFP). 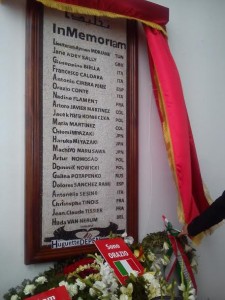 “This was made in solidarity with the Tunisian people that we meet here, a people who will not let what happened there, a week ago, unnoticed. Today, the presence of the Moroccan delegation represents Morocco’s solidarity with Tunisia,” said Nawal El Moutawakel, the International Olympic Committee vice-president.

For Dounia Tarji, the representative of the General Confederation of Enterprises of Morocco (CGEM), the presence of the Moroccan delegation expresses solidarity and the rejection of all forms of violence.

“We are all Bardo, we are against terrorism and with our Tunisian friends,” she said.