Tunis - Foreign heads of states, members of parliament, party leaders, and representatives of organizations took part in the international march against terrorism on Sunday, March 29, at the Bardo Museum, Tunis. At the same time, tens of thousands of citizens, mostly young people, participated in a second march at Bab Saadoun, near the city center, to denounce terrorism. 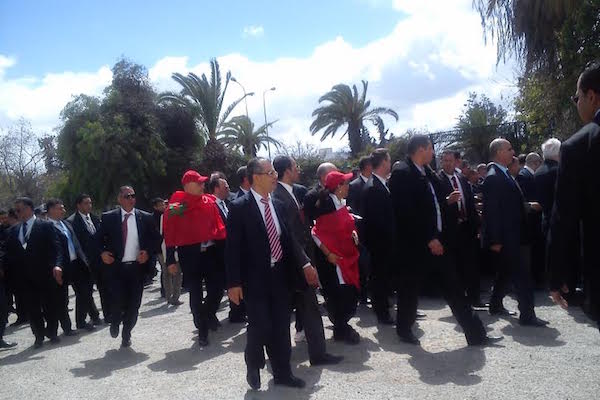 Tunis – Foreign heads of states, members of parliament, party leaders, and representatives of organizations took part in the international march against terrorism on Sunday, March 29, at the Bardo Museum, Tunis. At the same time, tens of thousands of citizens, mostly young people, participated in a second march at Bab Saadoun, near the city center, to denounce terrorism.

In the different cities in Tunisia, young Tunisians working for NGOs organized workshops and cultural activities as part of the fight against terrorism, especially during the World Social Forum (WSF), which was held from March 24 to 28. “I came to the march because I am Tunisian. Facts have demonstrated again at the WSF that young people are a big power. Young people are already mobilized against terrorism. We must now organize and supervise this mobilization. We have just received proposals for the organization of a young Congress against terrorism,” said Chokri Terzi, Tunisian Secretary of State for Youth, in Habib Essid Government.

Tunisian President Beji Caid Essebsi misspoke during his speech in the great hall of the Bardo Museum, after the inauguration of the monument commemorating the victims of Bardo attack on Sunday. Addressing his French counterpart, Francois Hollande, he said “Mr. President of the French Republic, François Mitterrand.” Francois Mitterrand was President of France from 1981 to 1995.

“We are the elected representatives of the nation. I was present in the parliament on the day of the attack and today I am participating in the march to say No to terrorism. We do not accept terrorism in Tunisia. We are working on the anti-terrorism law. We will study it, and in mid-April we will vote,” said Suhail Alouini, deputy member of Nida Tunes. According to him, the law will protect citizens against terrorism. It will be much tougher on people who advocate terrorism, and will protect the Tunisian police and military and will protect human rights. “It’s a balance that we try to keep. We hope to get there,” he added.

In 2015, two Republican marches were organized in the world after terrorist acts. The first was held in Paris in January following the events at Charlie Hebdo on January 7 and Hyper Kosher on January 9, while the second march was organized following the terrorist attack against Bardo museum on March 18.

The Tunisian Islamist movement Ennahda was also present at the march. “This is an event that marks the solidarity with the families of the victims, and also with Tunisia, who stands against terrorism. It is also a message to terrorists from the anywhere world who say that terrorism has no country or religion.

Muslims, Jews and Christians are united against terrorism,” said Rached Ghannouchi, leader of the Ennahda movement.

Tunisians living in Tunisia and elsewhere in the world gathered to denounce these acts. In some media outlets, terrorists are often associated with religion, and the media often circulates stereotypes that create confusion between religion and violence. “I am first a Tunisian. And this is my fight against terrorism. The tragedies in France and Tunisia were committed by people who have nothing to do with religion. They are trying to scare us. Today we met to show that we are for the unity and friendship among peoples and religions,” said Imam Chalghoumi, denouncing the recent acts at the Bardo Museum.

Claimed by the Islamic State group, the Bardo attack on March 18 left a total of 22 dead, including 21 foreign tourists and a Tunisian policeman. “The Tunisian people know that they are not alone. Let’s all together at the front and fight terrorism,” said the Tunisian President Beji Caid Essebsi.