Rabat - A photo of a little Syrian girl in a refugee camp surrendering before a photojournalist has quickly become a symbol of the human cost of the bloody war in Syria. 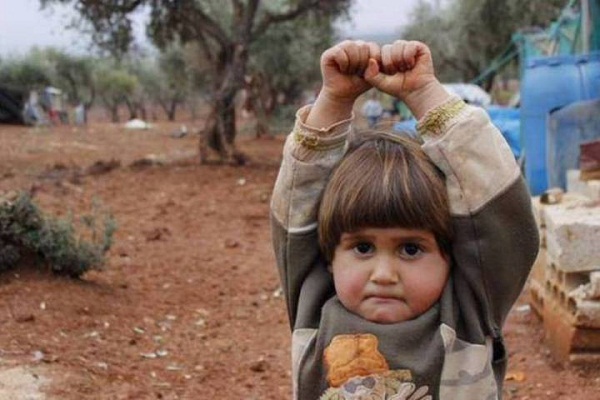 Rabat – A photo of a little Syrian girl in a refugee camp surrendering before a photojournalist has quickly become a symbol of the human cost of the bloody war in Syria.

Four-year-old Huda raises her hands in surrender when she mistook the photographer’s telephoto lens for a weapon.

The picture was taken by Turkish photographer Osman Sagirii at the Atmen refugee camp near the Syrian border with Turkey last December.

“I realized she was terrified after I took it, and looked at the picture, because she bit her lips and raised her hands. Normally kids run away, hide their faces or smile when they see a camera,” Sagirii told the BBC.

“You know there are displaced people in the camps. It makes more sense to see what they have suffered not through adults, but through children,” he added. “It is children who reflect the feelings with their innocence.”

The photo quickly went viral when it was shared by Palestinian-based photojournalist Nadia Abu Shaban on Twitter with the caption: “[she] thought he has a weapon not a camera so she gave up!”

According to the United Nations, the Syrian civil war that has entered its fifth year claimed the lives of more than 220,000, including 10,000 children.