New York - Sierra Leone is at risk of having Victor Foh, the controversial Vice President as its next President over the ensuing two years. Victor Foh’s unlawful appointment to the position of Vice President has led to widespread condemnation of the government for what many consider blatant violations of the country’s constitution. Amid the din of the ongoing battle to preserve democracy and the rule of law in the country, Sierra Leoneans must not lose sight of that disconcerting possibility if not likelihood. 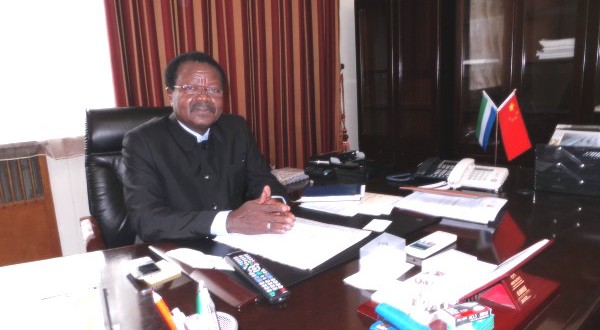 New York – Sierra Leone is at risk of having Victor Foh, the controversial Vice President as its next President over the ensuing two years. Victor Foh’s unlawful appointment to the position of Vice President has led to widespread condemnation of the government for what many consider blatant violations of the country’s constitution. Amid the din of the ongoing battle to preserve democracy and the rule of law in the country, Sierra Leoneans must not lose sight of that disconcerting possibility if not likelihood.

President Ernest Koroma on Thursday March 19 appointed Mr. Foh to the vice presidency of the country two days after the President removed from office the elected and sitting Vice President, Samuel Sam-Sumana. Mr. Foh briefly served as the country’s ambassador in China.

Vice President Foh, minutes after his appointment, profusely expressed unreserved loyalty to President Ernest Koroma, indicating that he was not interested in becoming president. Rather bizarrely, he went on to say that he will do everything to “carry out the president’s agenda,” including personally nominating whoever Mr. Koroma wants him, Mr. Foh, to nominate as the All Peoples Congress party candidate for the anticipated 2017 presidential election. However, despite his declaration, Mr. Foh, as he must know, is in a very good position – either by fate or fortune – to assume the presidency of the country from now to 2017.

According to the 1991 Sierra Leone Constitution (Section 49 (4)), whenever the President dies, resigns, retires or is removed from office (pursuant to applicable constitutional provisions) “the Vice-President shall assume office as President for the unexpired term of the President with effect from the date of the death, resignation, retirement or removal of the President, as the case may be.”

Should any of these events occur during the rest of the President’s term with Foh as his second in command, Foh’s expressed loyalty to President Koroma will obviously end since Mr. Koroma will no longer be in office. The Vice President’s loyalty at that juncture would undoubtedly be to himself first and foremost.

Given Mr. Foh’s political shrewdness from his long years in the game, it would not be unexpected for him to sing an entirely different tune with the presidency now in his grip. Indeed, he would be sure to garner support, intentionally or not, from certain quarters of the APC who might urge him to take full advantage of his position, with 2017 in mind. This, some might argue, will be the best approach to shore up the party’s hold on power and minimize cracks within its ranks prior to the presidential election in 2017.

There are those also within the APC party who are yearning to replace Mr. Koroma at the end of his term, but who are holding back at least for now and rallying behind Foh. And should the President’s office become vacant prior to the end of his term, the contained cracks within the ruling party will likely surface and become deeper and wider. This will likely lead to a slugfest that might enhance the opposition Sierra Leone Peoples Party’s chances of winning State House in 2017.

President Koroma’s sacking of Mr. Sam-Sumana and elevating one of his main loyalists, Mr. Foh to the position of Vice President has been widely condemned by legal scholars, civil society actors and ordinary citizens alike as a calculated violation of the country’s constitution. Most have pointed out that much like the presidency, the Vice President’s position is elective and not appointive. The Vice President, the arguments insist, cannot be removed from office by the President but rather by the process of impeachment proceedings initiated in Parliament should the need arise.

Adding intrigue to this saga is the well-known fact that President Ernest Koroma and Mr. Sam-Sumana have had a frosty relationship since 2012 when the last presidential election was held. Both men were reelected to their respective positions and by some accounts are not on talking terms.

Sam-Sumana’s current troubles started when the national advisory committee of the ruling party on Friday, March 6, expelled him from the APC party on dubious and yet to be proven allegations. They alleged that he falsified his educational credentials and lied about his religious background prior to his selection as presidential running mate in 2007. The committee also alleged that he had formed his own political party and that he had been fomenting unrest in his home region of Kono against perceived APC opponents. Mr. Sam-Sumana refuted the allegations and denied any wrongdoing. Vice President Sam-Sumana’s expulsion from the party took place while he was under a 21-day self-imposed quarantine in his residence following the death of one of his bodyguards from the Ebola virus.

A week following his expulsion, the BBC reported that Mr. Sam-Sumana had fled his residence for fear of his life and had sought asylum at the U.S. embassy in Freetown. His actions were reportedly prompted by an early morning incident at his residence, during which armed security personnel surrounded his home and disarmed his bodyguards. Thereafter, on March 17, President Koroma unlawfully relieved Mr. Sam-Sumana as Vice President on the grounds that he was no longer a member of the ruling APC and that he had effectively abandoned his position as Vice President by virtue of his decision to seek asylum at the embassy of a foreign country.

There are now calls from Sierra Leoneans across the globe to have Mr. Sam-Sumana reinstated. The opposition SLPP party in recent press releases indicated they intend to pursue legal action against the President on the matter, as a prelude to impeachment proceedings against the President if the court action is successful. In additiion, the SLPP outlined a host of planned actions, including nationwide demonstrations and the boycott of all functions where the President or Mr. Foh are in attendance or presiding.

It is highly unlikely, however, that any of the opposition’s proposed plans will reverse Mr. Foh’s appointment. That the President would so blatantly violate the constitution to remove a sitting vice president for political expediency, is ample demonstration that the President and the APC hierarchy have placed themselves above the efficacy and independence of the courts. The conventional wisdom is that the courts are sufficiently politicized and the judges themselves fearful of retribution for a decision that would unravel the President’s decision.

Mass civil disobedience might pose a problem for the administration. However, it is believed plans are afoot to ensure the current health state of emergency due to the Ebola epidemic can be used to minimize if not prevent any demonstrations.

The opposition’s planned boycotts and threatened walkouts in Parliament will have more symbolic than tangible effect. The APC have demonstrated in the past that they are not moved by such expressions of dissent. Moreover, the opposition SLPP is laboring to end infighting that has plagued the party since at least the 2012 national elections. There are even loud speculations that the ruling party has infiltrated the SLPP and co-opted some of its members prior to the sacking of Mr. Sam-Sumana.

So, after this saga comes to an end, as it will, Mr. Victor Foh could still be Vice President and in the driver’s seat to become President of Sierra Leone – possibly even before the 2017 elections. All of this, notwithstanding global condemnation of the unconstitutional removal from office of his predecessor and his own appointment, and his expressed lack of interest in the top job.