Rabat – Abdelmounaim Benakki, 16-year-old high school student, was the only Moroccan delegate to represent Morocco in the “Change the World Model United Nations Conference,” which was held from March 19th to 25th at the United Nations headquarters in New York city.

Change the World Model United Nations Conference (CWMUNC) is an annual series of international conferences organized in different countries around the world, such as Russia – UAE, and Italy. It brings together thousands of delegates from all over the world who debate different international political issues, like the real United Nations delegates.

CWMUNC is a Model UN conference in which, through the Future Leaders Program, students can simulate the activity of the G20, the Board of the World Bank, and the Board of the International Monetary Fund. Each year, the CWMUNC addresses one of the most pressing topics on the international agenda.

Past topics have included global warming and climate change, water shortages and sanitation, peace and security, human rights, poverty and hunger, social and economic development, and globalization. During the conference, students from different countries work together in order to develop concrete solutions to the matters under discussion, as if they were in a real world forum, studying and discussing key geopolitical issues. 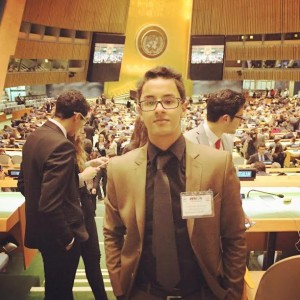 “I heard some of my friends talking about the Model United Nations conferences in general. I took a quick look on the Internet to know more about it and then I found the CWMUNC, which was very interesting. I applied for it and I received an e-mail from the organizing committee telling me that I was accepted,” Abdelmounaim told Morocco World News. “I was very surprised to be the first and only Moroccan to participate in such conference.”

This year’s conference was held in New York City from March 19th to 25th, and witnessed the participation of more that 2000 high school and university students coming from different countries around the world.

“This experience was the best thing that I have ever experienced in my whole life. Going to New York and participating in such conference at the headquarters of the United Nations is not something that happens to you everyday,”  Abdelmounaim said. “It was a dream at the beginning, but then I realized that impossible is nothing.”