Istanbul - ‘Many of these people cannot or do not want to be identified – they are a potential security threat to the whole of Europe in terms of terrorist and criminal infiltration, besides the economic concerns.’ 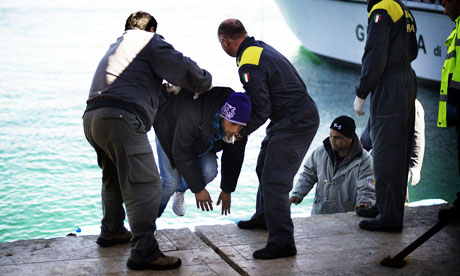 Istanbul – ‘Many of these people cannot or do not want to be identified – they are a potential security threat to the whole of Europe in terms of terrorist and criminal infiltration, besides the economic concerns.’

These words belong to Italian ambassador Alessandro de Pedys and ‘these people’ are the illegal immigrants who are fleeing to Europe hoping to get away from the immediate danger to their lives. Amongst them, there are very vulnerable children, women and the elderly.

But should we really be surprised at this behavior? Regrettably, most governments in Europe see illegal immigrants as a bothersome issue, not as real human beings that genuinely need help from their fellow humans. For instance, Italy recently has decided to halt its rescue operations for illegal immigrants stranded in the sea. They replaced their extensive search & rescue program Mare Nostrum with the EU’s Triton mission, which according to UNHCR Southern Europe head Laurens Jolles: “…doesn’t have as its principal mandate saving human lives and thus cannot be the response that is urgently needed,” This change, naturally, resulted in disaster and a couple of weeks ago, 300 people who took off from Libya in open, rubber boats perished in the sea, the youngest being 12.

Many people were shocked that a government would officially leave people to die just like that, especially after a very difficult 2014 when over 3,000 refugees died trying to cross the Mediterranean from Africa to Europe. But not so long ago, the British government also said that they would no longer take part in search and rescue operations for illegal immigrants, shockingly claiming that such operations simply encourage more immigrants. Another display of this approach became clear when pictures and videos showing the abuse of Algerian immigrants in a refugee center in Germany surfaced. In these pictures, two security officers were pinning an Algerian refugee face down, with one officer stepping on his head while the other was stepping on his legs. Are these isolated cases? Definitely not. In the notorious ‘left-to-die boat’ case, NATO refused to help a stranded boat full of refugees from Libya for 15 days and as a result, 63 people died of hunger and thirst, including one baby.

Yet as certain officials and governments in Europe adopt this approach, one local British council spent £19,000 for a ‘motivational magician’ while the Arts Council splashed out £95,000 on a skip covered in yellow lights. Ministers and officials ate £3 million worth of biscuits and European Commission President Barroso spent €249,000 on private jets. In the meantime, again through EU funds, €300,000 was spent on cocktail parties, including one blowout €75,000 night in Amsterdam. Surely, there is nothing wrong with buying art or providing amenities but if there is enough money for such activities, there must be funds to save, help and improve the life conditions of the illegal immigrants.

But these helpless people are treated like they are not even human. Is it the country that they are born in that decides how much they should be valued? All human beings are created equal. The three Abrahamic religions prohibit racism and the Universal Declaration of Human Rights make that simple principle very clear. Yet when these under-privileged people, who are born in poorer countries, wish to have the same dignified life as their European counterparts, they are rudely turned down.

But do those who see illegal immigrants as a burden ever think that every one of those people, who are only seen by many as an irritating statistic, is an individual with a soul, with a life, with regular hopes and dreams? Almost every individual has a family, possibly people expecting him to take care of them? And then there are those who are running for their lives, as their countries are battered by constant wars, clashes and turmoil. Or maybe he simply wants a better life, to which he is perfectly entitled according to the Universal Declaration of Human Rights.

Let’s not forget: We are responsible for our individual actions and responses. Others failing to show the necessary respect to human life does not mean that we should. Every human being is valuable and deserves our utmost respect and if we fail to do that, we alone will be responsible for our own actions. Once we remember this basic principle, the world will start turning into a much better place.