Fez - TV5 Monde, the international French-language television channel based in Paris and broadcasted in 200 countries was the victim of a powerful hacking attack by Islamist group dubbed “Cyber Caliphate.” 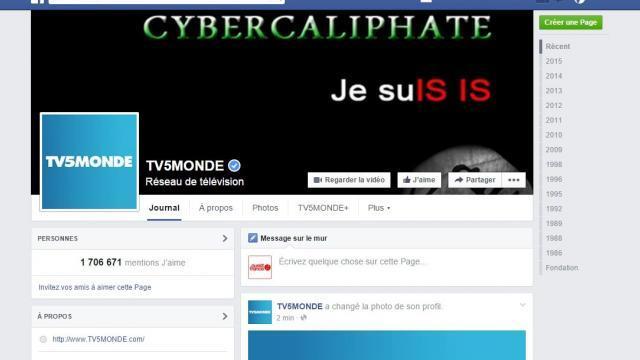 Fez – TV5 Monde, the international French-language television channel based in Paris and broadcasted in 200 countries was the victim of a powerful hacking attack by Islamist group dubbed “Cyber Caliphate.”

The channel’s website and several Twitter and Facebook pages were victims of a coordinated cyberattack on Wednesday, April 8. The attack was claimed by the Islamist group “Cyber Caliphate” which disabled the channel from broadcasting for three hours between 11:00 p.m. and 1:00 a.m. This morning, the site was still under maintenance and social networks that showed the Daech messages returned to normal operation.

“We have taken hold of Facebook and Twitter,” said the director of TV5 Monde, Yves Bigot. He added that the channel restarted transmission of programs in a number of areas but “our systems have been extremely damaged” by the power of the incredible attack and the return to normal “will take hours or even days.”

On the sites of the channels, messages appeared with black and white headers of pro-Daech groups and videos promoting the terrorist group cause, as well as threats to the French soldiers committed to the United States. Documents identifying relatives of soldiers involved in operations against Daech were also posted on the Facebook account of TV5 Monde.

The web sites also displayed a message accusing The French President Francois Hollande of having committed “an unforgivable mistake” leading “a war that serves no purpose.”

“This is why the French have received January gifts of Charlie Hebdo and Hyper Kosher” added the pirates, referring to the bloody attacks against the weekly satirical and the store that had killed 17 people between January 7 and 9 in Paris.

The jihadist group had managed to divert internet accounts, but never prevented the broadcasting of television programs. This kind of attack is new and calls media outlets to maximize their security measures.