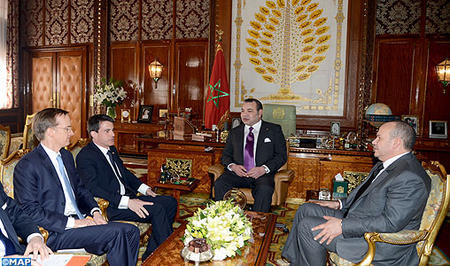 The audience highlighted the perfect convergence of views between Morocco and France on all strategic issues of common interest, the King’s Office said in a statement.

The visit of Mr. Valls, which comes following the visits to the Kingdom of Interior and Foreign Affairs ministers, reinforces the important prospects of bilateral partnership, the statement added.

On this occasion, the Sovereign and the French Prime Minister hailed the exceptional ties between the two countries and expressed their full commitment to further consolidate them, based on trust, ambition and mutual esteem.

The talks focused notably on strengthening the strategic partnership in all fields and regional and international issues of mutual interest, notably the regional situation in Western Africa and the Middle East, particularly in Libya, Mali and Syria, as well as cooperation in the field of security and de-radicalization.

During this audience, Mr. Valls emphasized the importance of the Mohammed VI Institute for the Training of Imams, Murshidines and Murshidates, expressing the hope of the French government to strengthen cooperation with the Kingdom in this area.

The audience was also an opportunity to discuss the preparations for the next high-level meeting and the commitment of French and Moroccan governments to work together for the success of this important meeting.