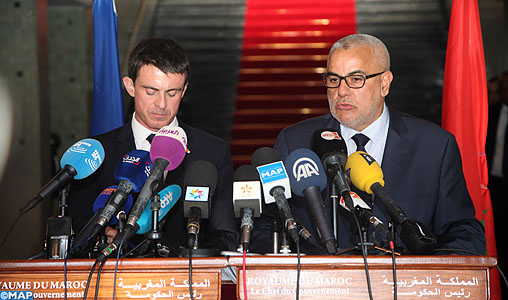 “France seeks to remain the favorite partner of Morocco in all areas of cooperation, notably political, economic, cultural and educational fields. We have an exceptional partnership that goes beyond friendship”, Valls said at a joint press conference with Government Chief Abdelilah Benkirane.

In this regard, French Prime Minister said that he would fully endeavor to mobilize his government to concretize the new stage of Moroccan-French relations, adding that this is an opportunity to write a new page of this partnership.

The French Prime Minister also stressed that his country is resolute “more than ever” to promote Moroccan-French relations in the fields of economy, education, higher education, culture and the fight against terrorism.

Reiterating the “unchanged position” of France on the issue of the Moroccan Sahara, he noted that he had discussed with the Government Chief the place of Islam in France and Europe.