Rabat - A bus filled with school children and a tanker truck collided on Friday near the city of Tantan, southern Morocco. 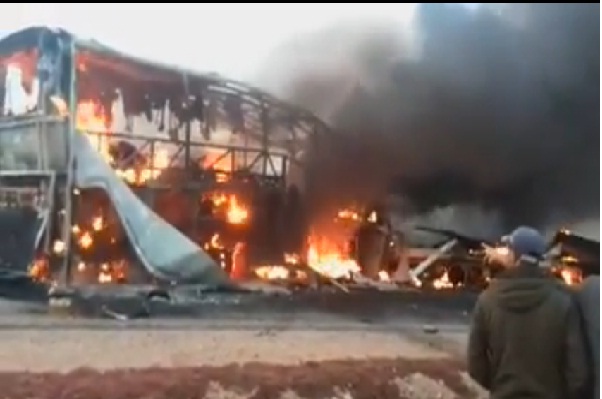 Rabat – A bus filled with school children and a tanker truck collided on Friday near the city of Tantan, southern Morocco.

The collision caused the explosion of the two vehicles and claimed the lives of more than 30 people, mostly children aged between 10 and 14. Nine people were injured.

According to media reports, the fatal accident occurred at about 6:00 am. The bus was carrying children on their way back to the city of Laayoune (South) after participating at the 6th National school games between 5-9 April in Rabat, Temara and Benslimane.

Among the victims are also representatives of the regional delegation of the Ministry of Youth and Sports as well as many children, reports say. Also among the dead is Hassan Isengar, a long distance runner.

Road accidents in Morocco lead to more than 4000 deaths each year, an average of ten people everyday, causing damage estimated at MAD 14 billion ($1,80), about 2% of GDP.

Officials said that during the past three years, efforts to increase safety led to the saving of 841 human lives and 3,117 seriously injured victims, and nearly 13,035 human lives in a decade.