Tan-Tan- Interior Minister Mohammed Hassad said that it is early to state the circumstances of the accident that occurred on Friday in the province of Tantan leaving 33 dead. 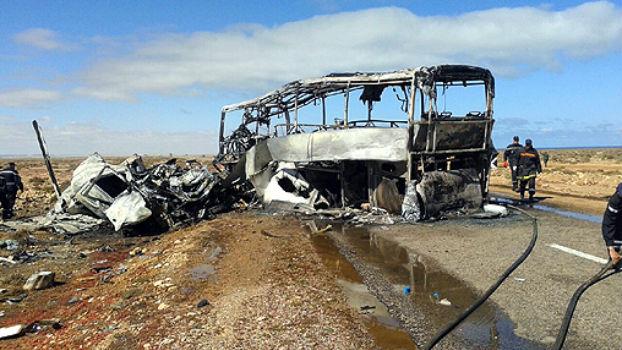 Tan-Tan- Interior Minister Mohammed Hassad said that it is early to state the circumstances of the accident that occurred on Friday in the province of Tantan leaving 33 dead.

The Minister told the press that investigations under the supervision of the general prosecutor are ongoing to determine the circumstances of the accident, adding that the preliminary results of the investigation show that the accident occurred due to a head-on collision between a bus and a semi-trailer which set the fuel tanker a blaze.

Hassad, who travelled to Tan-tan upon instructions from King Mohammed VI following this tragic accident, said that his visit aims to enquire about the conditions in which the injured are being treated, noting that three have been received at the regional hospital in Guelmim while two others were are hospitalized in Hassan Ben Mehdi hospital in Laayoune and the University hospital of Marrakech while others have left the provincial hospital in Tan-Tan after receiving medical care.

In this respect, Hassad lauded the efforts led by the civil protection in the province of Tan-Tan in rescuing the injured.

Concerning the status of the roads, Hassad stressed the need to enlarge the national road linking Tiznit and Laayoune.