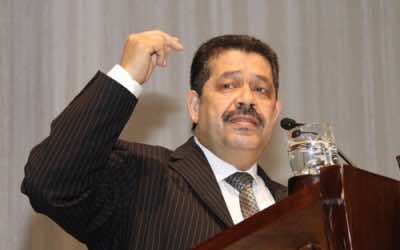 Chabat, who was a guest to Maghreb Arab Press Forum on Tuesday, accused the PJD-led government of not having taken the initiative to declare a national day of mourning for the deaths of 33 people, including 20 promising young athletes.

He added that Transport Minister Aziz Rabah is the primary responsible for the accident, as well as the death of nearly forty people who perished in the floods that swept the Guelmim region in November 2014.

Chabat said that his party is seriously preparing for the upcoming elections, particularly by visiting all regions of Morocco, and voiced satisfaction at the large number of new memberships to the IP (10,000 new members each month).

According to Chabat, his party “has not requested the postponement of the polls”, casting doubt on the government’s ability to organize elections. He reiterated the party’s call for the establishment of an independent commission to supervise the polls, noting that the government has turned down this request.

On Friday, April 10th, a bus carrying nearly 50 people and a semi-trailer collided near the city of Tantan, southern Morocco.

The head-on collision resulted in the deaths of many passengers onboard the doomed bus and the semi-trailer. Among the fatalities are twenty children who had just finished their participating at a national school games competition last week.