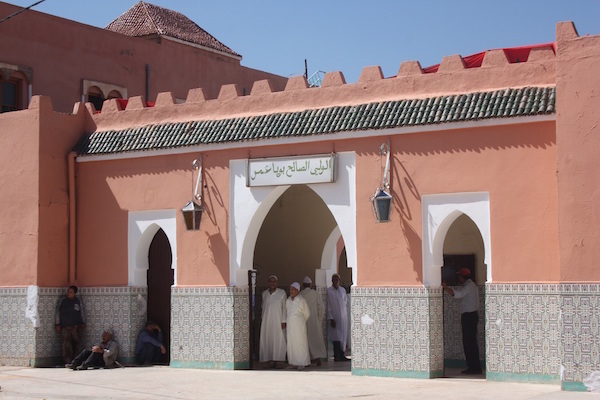 Rabat – The shrine of Bouya Omar is what we can call an extreme case of Sufism in the deeper layers of Moroccan society, where social misery is mixed with religious interest, sacred political ground, genies, demons, and mental illness.

The Bouya Omar shrine is often called the ‘Guantanamo of the epileptic and mentally ill’ by human rights organizations who are interested in putting an end to forced detention of hundreds of patients in Bouya Omar. People suffering from mental disorders and drug addictions are locked up on the pretext that they will be cured through evicting Jinns and casting out demons from their possessed bodies.

Nobles and descendants of the Saint in the province of El Kelaa des Sraghna (the province of Marrakech Tensift-Al Haouz) exploit the mental and neurological illnesses of a number of patients who are neglected by the wretched Moroccan health system. These people benefit from social misery, ignorance, and superstition. These nobles and descendants of the Saint fool their patients and mock them by robbing them of their money with lies and aggression.

They chain their patients’ necks, hands, and feet and imprison them in a dark place before throwing away the keys, saying that they will unchain and free them from their demonic prisons when they are cured. Sadly, what actually happens is that these patients remain there for years. They suffer from beatings, starvation, and humiliation from those who are responsible for the shrines and others who take advantage of nearby buildings and houses, turning them into detention centers and prisons for patients whose families are paying to visit the shrine. However, if they do not pay, the patients are kicked out and left to wander the streets.

The main concern is that this type of offense, which is punishable by law, is perpetuated today by a group of imposters who contribute to and defend this fraud in the name of Sufism, traditions, and traditional practice. They claim that these practices must be preserved and protected from extremists and Salafists who fight against it.

The story of Bouya Omar does not end here. It has a political dimension and other serious hidden backgrounds, especially for those who believe that laws and standards of human rights are what should rule the state and set its priorities.

Almost a year ago, El Hossein El Ouardi, the Minister of Health, promised to close the shrine of Bouya Omar after the Moroccan Association for Citizenship and Human Rights  presented a report to an international delegation concerning the forced detention and torture of hundreds of people at the site. However, nothing has happened since then. The Minister stated that the decision to close Bouya Omar is not in his hands, nor is it in the hands of the government.

In this regard, we can recall the opinion of Zakaria Rihani, a Moroccan sociology professor, in an earlier statement to Hespress. Rihani said that the “Moroccan Ministry of Health is not able to close Bouya Omar because it serves political goals. The support of such places and beliefs strengthens the royal political legitimacy, which itself falls in with religious legitimacy.”

The truth is that anyone who sees this practice might think that Moroccans are governed by demons, spirits, and myths, and not governed by a Constitution and legislative and executive institutions with specific jurisdictions. Also, religious legitimacy, to which theorists in charge of the Moroccan religious field refer all non-political and unconstitutional dispositions and practices, only passes through these myths, and not through constitutional, scientific, and political institutions shaped by law.

What can be directly surmised from this is that public institutions are formal institutions with no authority to make decisions. It can also be said that this decision is being made outside the constitutional framework according to visions that contradict the new constitution’s principles with respect to the sovereignty of justice and the law.

However, without indulging in a religious and doctrinal debate, since that is the mission of eminent scholars represented by the Supreme Religious Council, we have the right to wonder: what is the role of this Council as a constitutional institution? And where are its great fatwas and competences that stem from Article 41 of the new Moroccan constitution? “…the Council is the only party qualified to issue formally adopted fatwas on the matters referred to it based on the principles and provisions of Islam and its tolerant purposes,” Article 41 states.

Why wasn’t this Article referred to after the Minister of Health failed to take the necessary actions? And why didn’t he work on the implementation and adoption of the Islamic provisions regarding fighting witchcraft attacking the people’s safety, lives, health, and freedoms?

Where are the judicial institutions, such as the public prosecutor who investigates crimes of detention of persons arrested without a legal obligation? This is necessary as long as this case matches criminal practices according to the requirements of Article 436 of the Penal Code, stating that the “punishing by imprisonment of five to ten years all who kidnap or arrest a person without a warrant of competent authorities and not in conditions where the law allows or requires arresting people…”

In such a case where superstition intersects with the violation of human rights and the rule of law tangibly reveals the schizophrenia of the Moroccan political and legal domains, especially when the law is broken under false pretenses that do not apply to religion or religious legitimacy. All of the crimes perpetrated by some people in the name of goodness and holiness and all the exploitation practiced by those in the absence of a preventive and rights-based approach show the weakness of the Moroccan health system. Many patients are subjected to all types of exploitation, marginalization, and suffering, that, if it did not exist in Bouya Omar, could be found in the streets, the alleys, and the squares of Morocco.