Paris- The French-Moroccan Parliamentary Forum opened on Thursday in Paris with the participation of a Moroccan MP delegation led by the presidents of the Upper and Lower Houses Mohamed Cheikh Biadillah and Rachid Talbi Alami respectively . 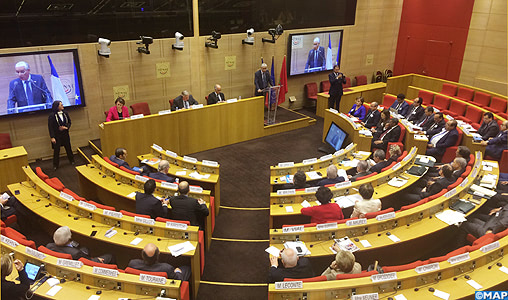 Paris- The French-Moroccan Parliamentary Forum opened on Thursday in Paris with the participation of a Moroccan MP delegation led by the presidents of the Upper and Lower Houses Mohamed Cheikh Biadillah and Rachid Talbi Alami respectively .

This meeting will be an opportunity to discuss several issues of common concern on top of which security cooperation and environmental challenges.

Special emphasis will be laid on “the fight against terrorism”, “cooperation in the Sahara-Sahel” and “national coexistence and intercultural Dialogue.”

The Forum, which will be end with by the adoption of a final statement, aims to deepen exchange on common challenges, including security and ecological challenges and sustainable development.