Fez - Shocked by the collision of a bus and a truck that killed 34 people on April 10, many Moroccans are asking, especially on social networks, for national mourning to honor the victims. 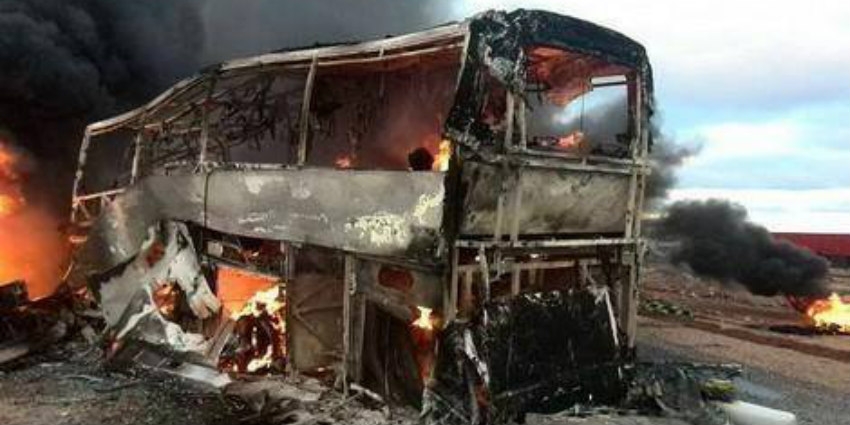 Fez – Shocked by the collision of a bus and a truck that killed 34 people on April 10, many Moroccans are asking, especially on social networks, for national mourning to honor the victims.

The tragedy occurred around 7:00 am Friday, April 10 in the Chbika town in the province of Tan-Tan, when a CTM bus came into collision with a truck, igniting a blaze that killed 34 people.

Being deeply affected by the tragic accident, many Moroccans are demanding a national mourning to pay tribute to the deceased victims.

Moroccans are demanding a national mourning through social media, especially Facebook and Twitter, in a step to show solidarity with the families of the victims.

Most Facebook users expressed their disappointment pointing out that Morocco declared three days of mourning for the King of Saudi Arabia and not even one day for the victims of dramatic Tan-Tan accident.

One Facebook user wrote ironically and indignantly: “Imagine if the 31 victims of Tan-Tan were tourists.”

Several others noted authorities’ the double standard in reaction to disasters, bringing up the recent effort to save the three Spanish cavers in the High Atlas, two of whom died.

They also mentioned the helicopters that were used to help foreign nationals during the recent flooding in southern Morocco while Moroccan victims were transported in dump trucks that are typically used for carrying garbage. Noticing the differences, social media users expressed their dissatisfaction.

“I’m fed up that we declared mourning for the Saudi king and not for tragedy involving Moroccans,” wrote Fadel Abdellaoui in Twitter.

“Our lives are worth nothing. They are only accessories to furnish the state,” reads another tweet.